At precisely 9:15 p.m., the lights at Pop's went dark. The sold-out crowd, which had been drinking (and/or tailgating) for hours, crackled up several notches as rock gods Motörhead took the stage. Lemmy Kilmister commented that it had been about ten years since the trio had last played the venue, and then introduced the set with a time-worn phrase: "We are Motörhead, and we play rock & roll." The crowd roared and reached toward the stage like rabid dogs.

And with that, the British band played a seamless, era-spanning set.

View a slideshow of photos from Motorhead, Clutch and Valient Thorr at Pop's

Reviewing what Motörhead does is difficult. First and foremost, the group is consistent. A "bad show" does not exist in Motörhead's world. The trio plays a tight, economical hybrid of punk and metal and always leaves 'em frothing for more. In fact, it's often said that Motörhead is its own genre - and nowhere is that idea truer than it is at one of the band's concerts. Lemmy's whiskey-pickled voice is a bit hoarser than it's been in the past, but somehow that just makes him even more badass. He doesn't move much on the stage, but these deliberate movements are the mark of a confident, iconic musician. Guitarist Phil Campbell whips picks into the crowd after he slashes through riff after flesh-searing riff. And drummer Mikkey Dee is just ferocious, a steady time-keeper who burns through the songs like a hot-rodding joyrider.

Motörhead's musical configuration - guitar, bass and drums - is also best described as economical. There's no fat, no fuss, no muss, no flash - just volume, head-nodding speed and good old-fashioned rock & fucking roll. About that volume, by the way: Before last night's fourth song, "Metropolis," Motörhead asked the crowd if it should play louder. (Perhaps out of deference to the photographers in the pit, the band waited until they were gone to pose the question.) The answer, of course, was a resounding yes. After some futzing with levels, the volume of the music went up significantly - and stayed loud for the duration of the night. 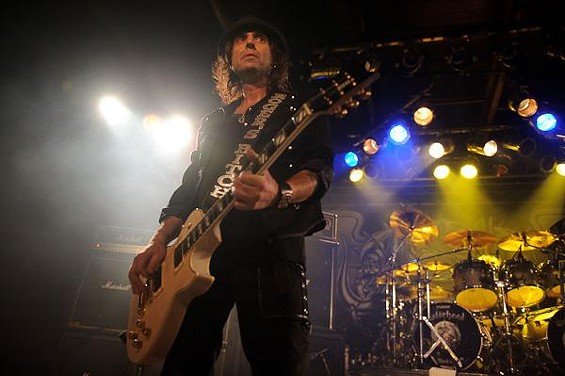 But Motörhead's decibel-busting is strangely calming - the inverse of white noise, yet still soothing. The same can be said about last night. You know what you're going to get at a Motörhead show. That doesn't make it boring or rote - quite the contrary. It's reassuring (and totally kickass) to hear the band kick the shit out of "Ace of Spades," "We Are Motörhead" and "Killed By Death." It's awesome to see young kids having their minds blown by Motörhead's sheer force. It's even a treat to see grown men -- some wobbling-drunk, others delirious with joy, most glassy-eyed - pumping their fists and throwing devil horns in the band's honor. Motörhead leaves a crowd satisfied. Lemmy rules. Devil horns up. Period. 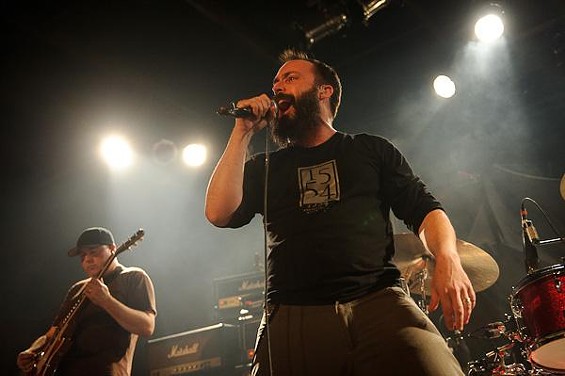 Pop's favorites Clutch -- the Maryland band frequently books headlining tour dates at the venue -- preceded Motörhead, and its performance thrilled the many die-hards in attendance. Its 50-minute set was well-paced: It started off with a slow, drowsy instrumental and gained energy, speed and force until the set-ending "Electric Worry," whose dirty boogie channeled ZZ Top. In between, the group proved why it's basically a jam band for metalheads. (Not a dis, for the record.) The uptempo stoner-blues of standout "The Mob Goes Wild" ratcheted up the energy after a distortion-swirled "Profits of Doom." Another highlight,"50,000 Unstoppable Watts," was even better, thanks to wicked, viscous grooves, while "Texan Book of the Dead" inspired several crowdsurfers.

Bearded vocalist Neil Fallon was a mesmerizing front man who gestured with well-timed hand jabs and other animated movements. His reverb-enhanced voice had tingles of genteel soul and even faint hints of gospel; it's clear he could easily cross over into other genres beyond metal if he wished. Still, in the end, Clutch felt somewhat odd-man-out in the lineup. That's not a knock on the quality of its music-- over two decades of touring has made the group a solid, sludgy machine. But after Valient Thorr's livewire thrash - and before Motörhead's speed-sleaze - the group's stoner-bro vibes felt out of place.

(Below review of Valient Thorr written by Robin Wheeler) 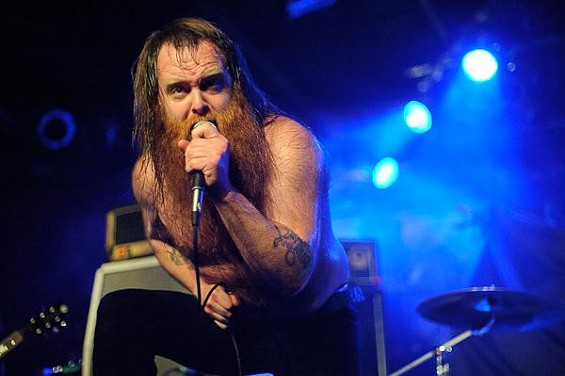 Valient Himself of Valient Thorr started the night by yelling, "This place is straight out of Roadhouse. It's an ass-kicking joint. Now let's rip out some hearts!" And that the band did, launching into "Mask of Sanity" and dedicating it to headliners Motörhead, as the crowd crushed toward the stage.

"Infinite Life" also received a dedication, to Ms. Pac-Man. The quip was rather tongue-in-cheek for a song soaked in the inevitability of death, a theme which recurred throughout the half-hour set. The blur of high-speed guitars and thrash ended on a positive note: Valient Himself declared, "We stand for peace and equality and sweaty rock and roll. We hope you do, too."

Critic's Notebook: The crowd had a somewhat-muted response after being asked if it was familiar with Motörhead's 2008 album, Motörizer. (Lemmy took the halfhearted reaction in stride.) He later introduced "I Got Mine" as a song "from 1983 - older than all of you." A cheeky observation, but it wasn't quite right: The age range within the crowd was impressive - from underage kids to grizzled metal grandpas.

In fact, the scene at Motorhead is almost as entertaining as the band itself. A dude in a Slayer T-shirt started talking to me and asked if I wanted to get closer. When I politely declined, he looked at the stage from my vantage point - right in the line of Lemmy sight - and said something to the effect of, "Dude, it's Lemmy!" Another man was beside himself at being there, as he told me he had waited thirty-four years to see the band.

The diversity of scenes was impressive, too - punks, hipster metalheads, teenage deviants, creepy metal dads, metal lifers, beardos, stoners, hipster douchebags, Pop's lifers and everyone in between showed up.