Interview: Pokey LaFarge on Working with Jack White and Releasing a Seven-Inch via Third Man Records 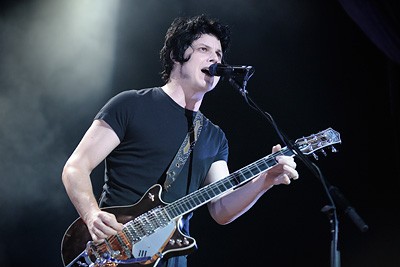 On Friday, Pokey LaFarge revealed that he and the South City Three have a new seven-inch forthcoming that was produced by Jack White - yes, that Jack White, of the White Stripes, Raconteurs and Third Man Records. Over the weekend, more details emerged: The record has two songs, "Pack It Up" b/w "Chittlin' Cookin' Time in Cheatham County," and it's part of Third Man Records' Blue Series. (Other notables in that series include Wanda Jackson, Dex Romweber Duo and Laura Marling.)

So, how exactly did this come about? According to LaFarge, credit the influential Nashville country-music radio station WSM (650 AM).

"It was around Thanksgiving, and some DJ was playing some songs in referral to Thanksgiving," he says. "They were playing tunes about sweet potatoes, and they played a Bob Willis tune, 'Tater Pie,' and they played one of our songs off our last album [Riverboat Soul], called 'Sweet Potato Blues.' And Jack heard that. His manager called my manager. Anyway, the next day I got a phone call from Jack White."

LaFarge wasn't totally blindsided by the call - his manager had given him a heads-up - but he was surprised that White himself was on the other line. ("I got the 615 area code number calling me and I was like, 'Oh, must be Jack's manager,' LaFarge says. "Well, it turned out that it was Jack, and I was like, 'Oh, holy shit.'") LaFarge says White told him he had a "tremendous voice" and that he "loved the sound" of the band's tunes - and then invited them to Nashville to record a Third Man session.

The recording took place in an eight-hour spurt on December 20 at White's Nashville studio. (Unbelievably, it was Pokey's first experience working with a producer for a recording.) LaFarge and the South City Three recorded four songs while there; White produced and Grammy-winner Vance Powell (who's worked with Keb' Mo, Buddy Guy and the Raconteurs) engineered. If that wasn't impressive enough, White called in session musicians to play on some tunes - a group which included a trumpet player, a clairinetist, a pianist and Raconteurs drummer Patrick Keeler. (The b-side of the seven-inch, "Chittlin' Cookin' Time in Cheatham County," features this augmented instrumentation.) LaFarge and co. performing "Sweet Potato Blues"

"I'm not going to say he's a genius, 'cause I only got to work with him one day," LaFarge says of White. "But he's very intelligent. We threw songs at him and he could almost instantly change things to make the tune better. I was very impressed.

"Working with Jack was great because we felt natural the second we walked in," he adds. "It was like we were pals, it was just crazy. But he was a hard worker - he was behind the board the whole time. Plus he was in the studio working out some things with us, arrangement of parts. It was constant work, he just has a hard work ethic. [But] he never was stressed out; he was just having a good time."

The seven-inch will be out in mid-March, and will be available in several places: on Third Man's website (and physical store in Nashville), via iTunes and also right here at Vintage Vinyl in St. Louis. Off Broadway will also be hosting a release party for the vinyl on April 1.