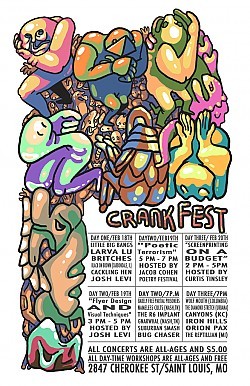 Kismet and ego have been at the root of great many happy accidents -- from the discovery of the New World to the discovery of Justin Bieber. This weekend, Joseph Hess is sharing another with the public: a DIY festival made up of bands he wanted to see, otherwise known as Crankfest.

"I'd received requests for shows from completely unrelated bands on those three nights," he says. "I started thinking to myself, March is always really good for shows because of South By Southwest, and there was a small run of really good shows in January and of course, from April on St Louis has an amazing line-up this year, but February was going to be the driest part.

"This is the perfect way to inject some excitement into the music scene and kick off the spring."

Hess is most excited to see Gnarwhal, a Nashville quartet whose sound is apparently so mind-blowing that mere words are insufficient to describe it. "That's the top band," he says. "Anyone who sees that band, it's going to blow them away. They're going to be Pitchfork darlings," he continues, adding that the band isn't cheesy indie rock, it's just "complex" and "awesome."

Crankfest also includes workshops hosted by local luminaries such as Eric Hall, who will shed light on the art of improvisation on Sunday. Jeremy Kannapell and RFT contributor Josh Levi (of Ghost Ice, and Aryan Cringe/Bikini Acid infamy, respectively) will present a two-hour workshop on show fliers and collage-making, while artist and musician Curtis Tinsley shows how to screen print on the cheap.

"All the workshops are designed to help facilitate the efforts of musicians right now," Hess says. "To show people and encourage people that flyermaking is definitely an art in and of itself, and getting people to shows should be as important as the performance that you put together--if there's no one there to see it, what's the point? [Kannapell and Levi] have a distinct style, I've definitely taken from their style and it's helped me out."

The programming includes local and touring bands, poetry readings by Brett Underwood and Sean Arnold, and it's an opportunity for musicians who aren't playing Crankfest to cross-promote. Hess aims to propel the music scene forward and facilitate collaboration and community between artists, so he's offering free admission in exchange for promotions: "If any band, any musician or any promoter brings 30 fliers or 30 demos to pass out, they get in for free. If they bring 5 of something, that's not enough effort. If you bring 30, that means you're serious about promoting yourself."

Though the line-up is Hess-centric, it's an excellent primer whose taste is more in line with the latest Urban Outfitters compilation than the stacks at Apop Records. "It's a great introduction to experimental music in St. Louis," Hess concludes. "New local music, music that is not renowned on a national level but very well could be. It's very cheap and all the bands are quality. The first night is obviously focused on noise. The second night starts with experimental hip hop, but the rest of the bands more go towards the prog side, the third night is all post-hardcore music. I won't try to pretend it's not an eclectic mix."

The Crankfest schedule is below. All shows are $5 and all-ages; workshops are all-ages and free, and these take place at Cranky Yellow (2847 Cherokee Street)

Day Three: February 20 2-5pm Screen Printing on a Budget with Curtis Tinsley 5-7pm The Art of Improvisation with Eric Hall