Review: Interpol and School of Seven Bells at the Pageant, Friday, February 11 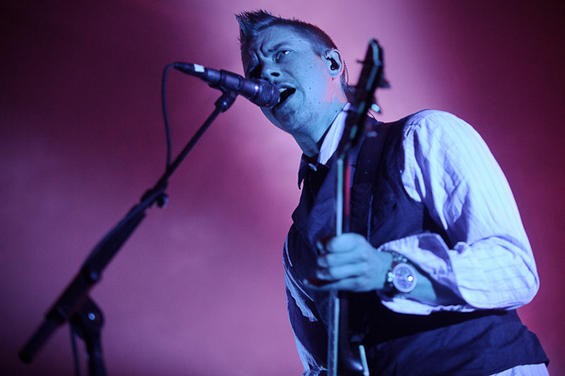 Paul Banks isn't chatty. He's not big on smiling, or doing that gross thing where a rock star cracks a joke that simultaneously gets the crowd a little moist in the drawers and makes them hate the guy for being so damn winning. And just to be clear, that's not a bad thing, and it isn't a criticism on his demeanor; it's merely an observation. Still, someone has to call out the elephant in the room last night -- where was the fervor from the crowd? Where was the standing ovation for a band that defied expectations? Are we so used to consuming without comment that we've forgotten our manners? Or were we taking cues from Banksy et al, buttoned-up in their suits and ties?

The departure of bassist Carlos Dengler should have made last night's performance at the Pageant another snorecore delivery, but the band bucked the trend of mediocrity found on its recent tours. Interpol's on a mission for redemption, and with hired guns David Pajo (of Tortoise and Slint fame) and keyboardist Brandon Curtis (Secret Machines) aboard, the group proved it can still level a crowd.

Banks was in fine fettle, his unmistakable vocals oscillating from manic entreaty to jaded melancholy. Predictably, the rhythm section was on fire throughout the 90-minute set. Interpol opened with "Success," from 2010's self-titled album, followed by a triple dose of 2002 and 2004. The speedy "Say Hello to The Angels" the paranoiac swell of "Narc" and understated morosity of "Hands Away" washed over the crowd; a cool nostalgia breeze elicited much fist-pumping and invisble pogo-ing.

Banks rightly assumed that the majority of the audience wasn't as familiar with the new Interpol material, and those were the only songs he name checked after playing them. "That song is called 'Barricade,'" he said, as if politely admitting that there's a reason why we don't know these songs. It's indicative of the Interpol way, and it set them apart from the pack of New York indie bands clamoring for attention in the early Aughts; the band is incredibly professional and ineffably dignified. 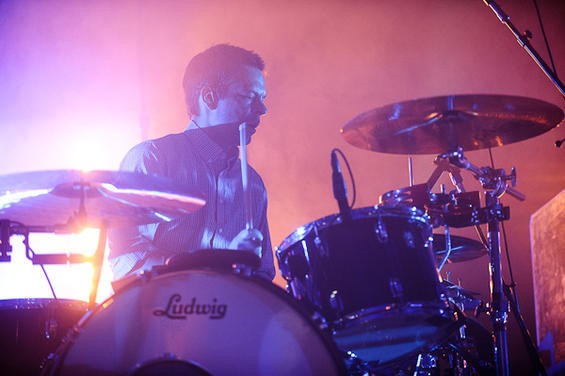 "Length of Love" showed Interpol at its best and most Joy Division-y, angular guitar slicing through taut, foreboding rhythms. Another new track, "Lights," showcased the band's recent preoccupation with texture. The band has given up trying to deliver the precise hooks and simplistic urgency of its earlier work (such as "C'mere" and "Take You On A Cruise") and it's now experimenting with rendering a (not unwelcome) cinematic tactility. "Obsatcle 1" ended the set on a bombastic note, and the band left the stage with a well-mannered "You guys are a lot of fun, thank you very much." They returned coolly 90 seconds later with a righteous encore of crowd favorites, "Untitled," "Slow Hands" and "Not Even Jail." Those three songs were worth the cost of admission. The crowd sang along to "Untitled" and let loose for the final cuts.

While School of Seven Bells and Interpol aren't similar musically, comparisons abound. Both New York bands lost a founding member in 2010 (vocalist Alejandra Deheza's twin sister Claudia left the former act), and each contains a Curtis: Benjamin, who's formerly of Secret Machines, is the guitarist for School of Seven Bells.

Curtis' current band does heady, rapture-inducing atmospherics -- and, like Interpol, the act may have painted itself into a corner by delivering its signature sounds with such aplomb. However, SVIIB is already showing signs of creative evolution: While the band originally smacked of a one-trick My Bloody Valentine-revival pony, in a live setting it was dreamy, thoughtful and totally engaging. (And not quite the pantywaist shoegazers we were expecting.) Spritely singer Alejandra Deheza recalled Cocteau Twins chanteuse Elisabeth Fraser on "Joviann" (from 2010's Disconnect From Desire), and during many other songs the band proved its strong suit is minimal beats and luxuriant noise.

The ambient churn of the ten-minute burner "Sempiternal-Amaranth" closed School of Seven Bells' set. It never felt like a ten minute song; the slow build eventually erupted into the come to Jesus moment; a blinding wall of distortion-heavy guitar noise and menacing drums. It was a cathartic exorcism of noise that I could have listened to all night.

Encore Untitled The New Slow Hands Not Even Jail

Critic's Notebook: If you happen upon a woefully misplaced reporter's notebook at a teeming concert venue, especially one as well-staffed as The Pageant, find someone in charge and please turn it in. Hopefully you learned a new vocab word in my free-associated, nonsensical scrawl. And you left the pen! Why steal the notebook but not the pen? Are you calling my pens fat?!

Random Comment: Crowd member on Benjamin Curtis: "Dude, I couldn't tell if that was a guy or a girl. The one with the guitar? Is that a guy or a girl?" Attention straight men who think their inability to identify another human makes them seem "cooler" or "straighter": It sort of has the opposite effect. This "I'm so straight I sneeze Y chromosomes" posturing is played, and makes us think you were secretly lusting after Curtis' slender hips, not merely wondering who was ripping the shit out of that guitar. Men with eccentric hairstyles and skinny jeans are about as new as disco, get with it.