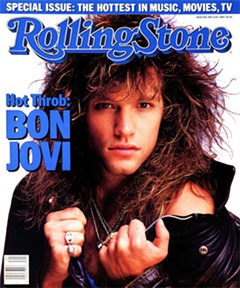 Interesting tweet from A to Z reader @gcflatt just a bit ago, asking if we had noticed a Bon Jovi show scheduled for May 22 at the Scottrade Center. Believe it or not, this was the first we had heard of it. However, a quick glance at Pollstar appears to confirm a date, and there's also a Ticketmaster entry for the show. However, there's no word yet from Scottrade Center, who's the only one who can confirm the show 100 percent. (A to Z imagines they might be a little preoccupied with Taylor Swift's on-sale tomorrow; judging by these list of rules, it seems like they're fearing a zoo at the box office.) Either way, we'll keep you posted.

[Update, 1 p.m. February 3: Well, @101ESPN apparently confirmed the show too and said tickets are on sale next Friday, with a pre-sale going on the day before. We'll see!]

[Update, 7 a.m. February 7: This show is confirmed and tickets are on sale Friday, February 11, at 10 a.m. According to the press release, "By overwhelming popular demand Bon Jovi 2011 tour adds St. Louis concert."]

Below, my favorite Bon Jovi song.