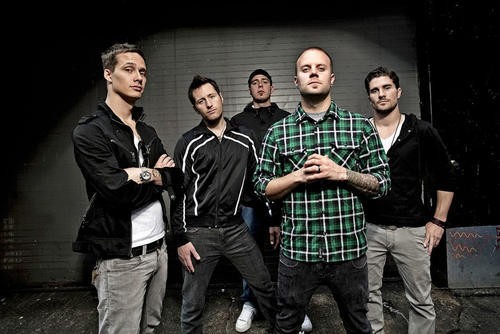 In this week's RFT, Story of the Year frontman Dan Marsala reveals some obscure trivia about the band's breakthrough album, Page Avenue, which the band will play in its entirety Friday, February 4 at the Pageant. Below, read on for some leftovers about songs from the record, the band's recent activity, and singer's reaction to the movie with a title similar to SOTY's 2008 Epitaph Records debut, The Black Swan:

D.X. Ferris: What has Story of the Year been up to? Dan Marsala: We're recording a Nirvana song, "Breed." It's for a Nirvana tribute album. It's for the 20th anniversary of Nevermind. Hawthorne Heights and some other bands are on it. I'm not sure about when it's coming out.

It's funny: Ryan [Phillips, guitarist] and I met when we were fifteen. We would get together and cover Nirvana and Green Day songs. It was '95-ish. He wanted to play with me because he thought I sounded like Kurt Cobain.

Black Swan--[director] Darren Aronofsky stole your shit, right? Yeah, obviously. We got that name from a book, actually. Then about a year after the record came out, we heard they were making a movie called Black Swan. We thought that was funny. [The movie] was alright. It was a lot of ballet. Nothing super happened. I was expecting a big twist or something.

How does St. Louis manifest on Page Avenue? It has a lot of influence, for sure. We had moved to Orange County, and we were there for the majority of the writing. We were away from home for an extended period for the first time in our lives. We were all 20, 21. We were experiencing a whole new world. A lot of the lyrics are reflective of that: of being away, being out of your comfort zone, missing your friends, missing that normal life.

The actual song "Page Avenue" is directly about that. "Until the Day I Die," a lot of people think it's a love song, but it's more about friendship and about being in our band and our experiences together, living in a van with five guys. [The album] has a lot of references to St. Louis and things we grew up doing. But at the same time, it's the optimism of "We're doing this!" It's very reflective of growing up there and the things we loved.

Talk about "In The Shadows." I started off as the drummer, then guitarist, then became the singer--it's more fun. I always [contributed] a little guitar part here and here. I think I came up with the original idea [for the song]. I took it to the band, we played it a bunch.

It was completely different at the time. It was all jumbled and tried to be super-technical. I think it had a weird drum beat behind it at the time. We took it to the studio, and the verses stayed the same. [Producer John] Feldmann was like, "Dude, you've got to have some kind of chorus." Then we wrote the whole whoa-oh part. Like, "Yeah, I like whoas." That became a fan favorite. Adam [Russell, bass] helped a lot with that song.

What about the hidden track? Feldmann recorded everything [including] any outtakes or bloopers--just hanging out. He surprised us with that [track]. That was all spur-of-the-moment stuff that happened. I sing the "Until the Day I Die" chorus line, and then I start laughing. I was trying to nail it, to do it really hard. But I just ended up laughing because it sounds really stupid.

John's vegan and doesn't drink, so he has fun in other ways. It would be 5 a.m., we'd still be up recording. He'd be like, "Let's put on wet suits and go surfing!" It was fun, but a lot of work, too. Feldmann is not a dude who's afraid to work 16 hours a day.

What about "Swallow the Knife"? We started with a guitar riff. Ryan [Phillips, rhythm guitarist and one of the group's songwriters] had a demo [and said], "I want to make a song out of this, something just gross and trashy." The trashy part didn't come through. Feldmann made it a much bigger song.

Lyrically, it's about an ex- member of our band who was in the band when we started writing the record. We wrote it about the process of losing a member and moving on. It was our old guitar player, Greg Haupt. He was in the band maybe a year when we moved to California. He wasn't an original member. We were originally a four-piece.

[His departure] was just one of those things. People have different attitudes that clash and you can't really work it out. That's the hardest thing about being in a band, the relationships. It's like a marriage between five people. He ended up staying with us [in the house the band shared] for awhile. We were still friends. He took it well. We knew Phil [Sneed, his replacement] from his old band in St. Louis called Maybe Today. We called him up like, "How's your band doing? Would you like to join our band?" He flew out and lived on our couch. The lineup has been the same since.