Interview: b-gyrl, Hip-Hop 911/Stop the Violence Concert Coordinator, on the Dire Importance Of This Anti-Violence Movement 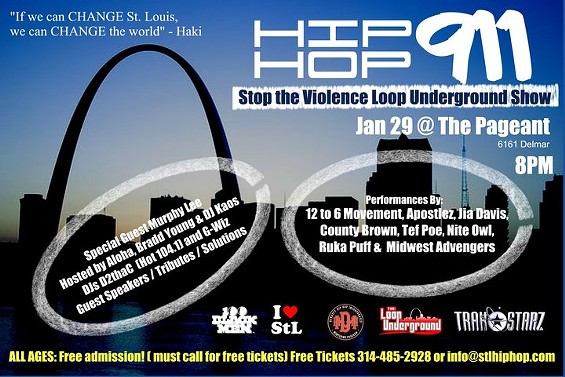 On Saturday night, artists from all corners of the hip-hop community will gather at the Pageant for a very important occasion. Dubbed the Hip-Hop 911 / Stop the Violence Concert, it's an awareness-raising event drawing attention to the movement of the same name, whose aim is to address and ameliorate the problem of violence in St. Louis. The list of artists participating is impressive: Murphy Lee, Jia Davis, Ruka Puff, Midwest Avengers, the Apostlez, Tef Poe, Nite Owl, 12 to 6 Movement and County Brown are scheduled to perform; Aloha, Bradd Young and DJ Kaos are hosting. Along with performers, however, the night will feature speeches from Alderman Antonio French, the Evening Whirl's J. Bailey and Minister Tony Muhammad (who has helped facilitate gang truce in L.A.), and Youth Ambassadors from the Dynasty Hip-Hop Mentoring Program. The event is free for those over 21 (and $5 for anyone under 21), but you must have a ticket. Go to stlhiphop.com/hiphop911 for info on how to obtain tickets. Yesterday, I chatted with the event coordinator of the concert, b-gyrl - who's also associated with stlhiphop.com, about the genesis of the concert -- and the dire importance of this movement.

Annie Zaleski: How long has this concert been in the works? Where did the idea/premise for it come from? b-gyrl: The idea came from Tory Whiteside, a member of our hip hop community. He contacted me shortly after our city gained the distinction as the most dangerous in the nation. He asked if there was something stlhiphop could do, perhaps a edutainment type show at the Pageant to bring awareness to the seriousness to of the issue crime in St. Louis

I reached out to Scott Rivers with the Loop Underground, [and] we were able to secure the Pageant, I got word around the holidays. We pushed, reached out, mobilized -- we had three to four weeks to put everything together.

To plan a concert, that's not a very long time at all! What were the musicians' reactions when you guys reached out? How many people did you approach? No, not at all. Fortunately we have relationships with all the artists, we picked those who are vets, artists that are professional, who've done big shows before, know how to adapt. Everyone on the roster is great.

I lost count of how many we reached out to; some were quick to jump in, DJ Kaos, one of the hosts was the first to respond to our call to action, followed by DJ G-Wiz, formerly of Street Vibes, then Aloha, Bradd [Young], D2thaC.

As far as performers -- Ruka Puff put a call out [and] even opened his studio up for a "Stop the Violence" session the night before. They've all been great. There were people we reached out to, who for whatever reason didn't respond. Not just that they declined -- they didn't respond at all, which is unfortunate. Violence is an issue that affects us all.

Then there's the ego thing...

Ego thing? Some expected us to reach out to them or to get at them within their time frame, not understanding we were already short-staffed. We needed -- and still need -- people to jump in, get in where they fit in. Crisis dictates action.

That's a shame, because so many of these artists are in the position to have the greatest influence. I think a lot of them have become desensitized to violence. A couple of days ago, some middle school students were held up at gunpoint while waiting for their school bus. Last month ten teens were shot [on] Christmas night. The month before, an eight-year-old was shot in the back. How do we not respond? How is this not the most pressing issue, how it this not more important than anything else going in our scene? In our city? Every St. Louis artist, DJ and industry-type should be involved, and it shouldn't take an invitation. Same for city officials.

Speaking of city officials, let me add [that] Alderman Antonio French was also one of the first to answer the call.

When you spell out the violence like that -- in black and white, all of the instances in a row -- it really is striking. It makes me almost sick to my stomach. Do you feel that now, in 2011, things have come to a boiling point almost? Or is it that addressing -- and I guess trying to fix -- these issues is just long overdue? The issue has been simmering for a while, no one wants to address it because when you look at the facts and figures, you have to deal with a lot of social and cultural issues St. Louis is reluctant to deal with.

[But] we have to. Its like a simmering pot of water on the stove that comes to a slow boil, at some point all the water is going to evaporate, the pot will catch fire and burn the entire house down. All the water has evaporated.

It really does seem to me to be that way; I agree. How do you feel that music and specifically, the musicians performing on Saturday) will be able to help address these issues? What is it about music that can help have a positive impact? Music is a very powerful tool. It can evoke a wide range of emotion, and that's what we need to tap into in order to wake this city up. This is a diverse group of artists from different backgrounds and they bring a variety of messages, messages that everyone can relate to [in] one way or another. When people relate, they feel connected. Positive energy comes from that connection. That's what we're trying to tap into -- positive energy. 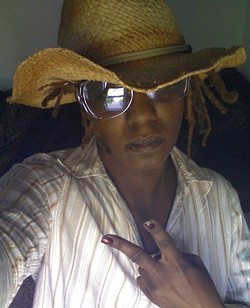 That's exactly what struck me about the line-up of artists -- they come from all corners of the St. Louis hip-hop world. It wasn't just one clique or aspect of the genre represented; it was every part. I think that unity is important -- it conveys a unified front and shows that this is a concern of all people, not just some people. That's the key! A united front. That's how we turn this around -- from the stage to the streets

Talk to me about the speakers involved in the night as well. [You said] Antonio French wanted to participate right away. How did the other people come on board? I like that the show involves education and entertainment -- it's a reminder that things are serious. We sounded the alarm, which really didn't take much considering all the violence reported every day in the news. Alderman Antonio French has been on the forefront of fighting crime in his ward, his response was instant. We reached out to everyone. Senator Claire McCaskill's office responded rather quickly to our request that she or a representative attend. We've been going back and forth with the mayor's office. We extended invites to the Chief of Police, the Board of Aldermen, Superintendent of St. Louis Public Schools. Due to time constraints and busy schedules, we couldn't reach everyone we wanted, so [if] I could, I would like to invite all city and county officials, citizens, victim's families. Things are serious.

Other speakers [at the event] include people in our scene, [such as the] Dynasty Hip-Hop Mentoring Program, a co-sponsor, that has been successful using hip-hop as a tool to reach youth; King Odie, a St. Louis legend [and a] well-respected statesman; Haki from ACOPP (Assisting Children Of Prison Parents); Prince Ea, who launched the "Smart Is Cool" campaign, and J-Kwon. And finally, members of victim's families [will be speaking]. Who better to speak out than those who have had their lives shattered?

I think that would make the problem real -- not abstract -- to a lot of people. A concert like this is definitely a solid start to addressing the problems we're facing. What's next? What's the best way to continue working on the issues of violence in St. Louis? Hip Hop 911/Stop the Violence is a movement. The first step is getting people to understand our work has just begun. We have to work with organizations such as the Dynasty Hip-Hop Mentoring Program and individually reach out to the young people in this city. We have to play a part in their lives -- consistently. It does take a village to raise a child. We have to care -- and not just [care] about our own children, [but care about] every child. That child you easily dismiss could end up being the person that harms one of your loved ones. The child that had his life cut short could have been the next Martin Luther King or the scientist with the cure for AIDS. We have to instill self-value, teach that life is valuable and conquer the mentality of living for today. A lot of young people don't expect to live to reach 21.

Most important, we have to teach conflict resolution skills, not every dispute has to end in violence A lot of what we're seeing is kids emulating adults. We have to break the cycle.