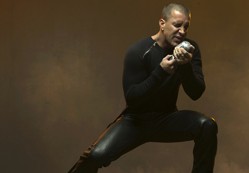 (Via ultimate-guitar.com) In many circles, Creed and its post-grunge posturing is widely derided. But to a 13-year-old Norwegian boy, the band is a life-saver. According to a story on Spiegel's online edition, the teen was on his way home from school -- and encountered four wolves, which he initially thought were dogs.

"I was afraid they would attack me," Walter told the Norwegian tabloid VG, describing the incident, which took place on Monday. But he didn't let his fear show. Remembering his parents' advice, Walter pulled the earphones out of his mobile phone, turned the volume all the way up and blasted heavy metal music over its miniature speakers. At the same time, he yelled as loud as he could while flailing his arms about wildly to scare off the pack of wild animals.

And what song did he play to make the wolves leave without incident?

By the way: You can congratulate Creed front man Scott Stapp in person on April 7 at the Ameristar Casino in St. Charles. He's doing an acoustic performance at the Bottleneck Blues Bar. Tickets are $40.