Review: Marshall Crenshaw with the Bottle Rockets at Off Broadway, Wednesday, January 19

Prior to last night's show at Off Broadway, Bottle Rockets guitarist John Horton stood in the lobby and expressed nervousness about the impending concert -- which was the first show in a series of gigs backing '80s power-pop icon Marshall Crenshaw.

Horton and company had nothing to worry about.

The BoRox opened with its own set and played to a packed house, despite the weeknight snow panic. Met by a crowd filled with hardcore fans and loved ones, the band plowed through a high energy hour-long set filled with Bottle Rockets favorites.

Crenshaw seemed amazed at the boisterous love and support provided to his new band from the hometown crowd. His set opened with "There She Goes Again." It was a tentative performance, much slower than the recorded version. Crenshaw's vocals remain strong, though, and they blended beautifully with bassist Keith Voegele's harmonies. The configuration of three guitarists and a bassist on stage hinted at a deep guitar wall that would grow throughout the set.

Through "Cynical Girl" and "Live and Learn," which featured John Horton on pedal lap-steel guitar, the band found its comfort zone with the new material, and gradually relaxed into its usual confident stage presence. By the bopping "Mary Anne," everyone was loose and happy, with Henneman finally stepping up to the mic for the song's three-part harmony. 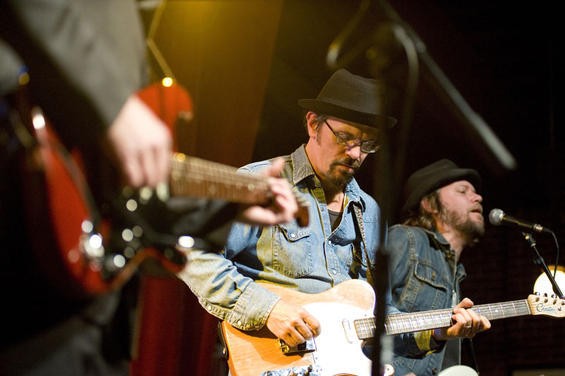 The power pop blended into "Stormy River," which maintained a jangly base under darker tones. The song could work for Crenshaw or the Bottle Rockets, with its blend of hooks and a simmering guitar storm that spun into a Neil Young-inspired instrumental ending. On this song, the Bottle Rockets emerged more as collaborators than it did a backing band.

The group continued to hold its own through Richard Thompson's "Valerie," which was full of Bottle Rockets-styled countrified guitar and Crenshaw's rockabilly tempo; the song even had a signature BoRox guitar-blast ending. Two songs later, on a cover of Buddy Holly's "Crying, Hoping, Waiting," Crenshaw channeled the late singer. Mark Ortmann's drumming built to stomping military precision while Crenshaw, Horton, Henneman and Voegele orchestrated a rich and restrained guitar assault far more complex than the Crickets' original. Henneman ventured into a Hollyesque guitar solo, but rejoined the pack of guitars for an ending that built with methodical force and then abruptly stopped. No flourish or fanfare, the musical expression of frustration and heartache.

And then band became the seamless backing band for Crenshaw's standard "Whenever You're on My Mind," which is still as full of pristine longing as it was in 1983. Same with Crenshaw's biggest hit, "Someday, Someway," despite some vocal faltering on the latter. Not that it mattered much: With the band's precision and Crenshaw's joyous energy, the song maintained its power pop perfection, leaving the crowd dancing and singing. 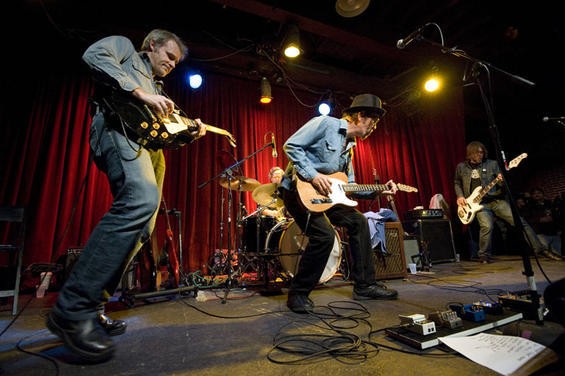 The group ended the set with a rocking take on "Better Back Off." All guitar restraint was gone, a wailing blast to match Ortmann's thunder, a perfect high-energy end to the 90-minute set. This left the crowd riled and excited for the encore, which started with Crenshaw taking lead vocals on the Bottle Rockets' "Kit Kat Clock." While the band played its song as astutely as ever, Crenshaw's plaintive vocals brought a vulnerability to the song, making it feel sadder and have more longing than Henneman's more frustrated original. One version isn't necessarily better than the other, but the switch in vocal tone illustrates the strength of the songwriting -- and the ability of two talented vocalists to change the mood and tone of a song without changing the words or music.

The show ended with Voegele channeling Cheap Trick's Robin Zander on a blazing take on that band's "Surrender." Crenshaw and Henneman did backup harmonies and let Voegele, who'd been solidly displaying his vocal prowess on harmonies all night, steal the encore. Two acts that might not seem to have much in common beyond a mutual admiration came together with a song by a band they all love. Five musicians on a small stage, reveling in their new accomplishment, full of boisterous joy. As the song raged to its end, Henneman, sans mic, continued to sing along with his head thrown back and a grin on his face.

It would be easy for Marshall Crenshaw and the Bottle Rockets to rest on past successes; they didn't have to take the risk of a new partnership and experience the nervousness most musicians leave behind early in the game. Thankfully, the men made the effort -- and created something new and wonderful from what already existed.

There She Goes Again
Cynical Girl
Live and Learn
Calling Out for Love (At Crying Time)
Mary Anne
Stormy River
What Do You Dream Of
Television Light
Valerie (Richard Thompson cover)
Right on Time
Crying, Waiting, Hoping (Buddy Holly cover)
Whenever You're on My Mind
Something's Gonna Happen
Someday, Someway
Better Back Off