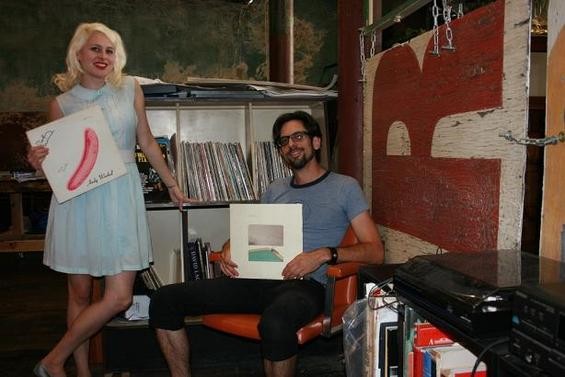 After Joe Schwab filled A to Z in on Euclid Records' pop-up store at Wilco's Solid Sound Festival, he chatted about what the store's record label -- uh, Euclid Records -- is up to.

First, the next installment in its "Euclid Sessions" seven-inch series - one from LA singer-songwriter Peter Case, who was backed by local Joe Mayer - is "due around Valentine's Day," he says. Former St. Louis resident (and sometimes RFT illustrator) Art Chantry designed the cover, while the contents of the record ("Dig What You're Puttin' Down'" and a cover of Chuck Berry's "Nadine") Schwab describes as "raw but charming, kinda like Mr. Case!"

Next, Sleepy Kitty's debut album is moving toward a firm release date. The indie darlings still need to mix and master it, but as of now the release date is possibly early March.

"The whole thing flows beautifully with charmingly quiet and loud raunchy moments," Schwab says. "The sessions were done with Jason Hutto. They seem to be a match made in heaven."

Psych-popsters Troubadour Dali are also planning to release a full-length, which they've recorded with Jason McEntire. "I think people familiar with the first album will be blown away by the depth of the songwriting on this one," Schwab says. "Most of the songs on the first CD were at least three years old once the CD hit the shelves. Troubadour has such a huge backlog of songs that we'll simply never catch up unless they get all Robert Pollard on us. The songs are pretty poppy, with a good amount of the dreamy buzz that's been their signature sound." This should be out in May.

Finally, the label is also working on something very cool for fans of older St. Louis bands: a reissue of the Painkillers' 1986 cassette on CD. The quartet, which featured Carl Pandolfi, Mike Martin, Jack Petracek and Jeff Barbush (who committed suicide in 1999), was a beloved local power-pop band in the mid-'80s. This reissue comes complete with thirteen additional bonus studio tracks, Thomas Crone-penned liner notes and a booklet with pictures and memorabilia; a tribute show is also in the works.

"We're looking at a Record Store Day (April 16) release with a tribute/CD release show at Off Broadway the night before," Schwab says. "It's looking like the three surviving members will be backing some singers as well as a few other bands doing their interpretations of Painkillers songs."

The Painkillers at the old Mississippi Nights covering Wire and doing an original, "Oracle":