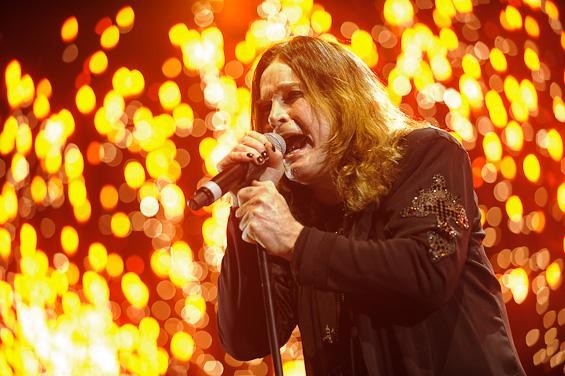 "The crazier you fuckers go, the longer we will play," Ozzy Osbourne crowed to the audience at the start of last night's Scottrade Center show. While a statement like that is always tinged with hyperbole, there was an element of truth to it: Last night's gig, a make-up date from Ozzy's canceled December show, didn't skimp on tunes or time.

The career-spanning set touched on all eras of Ozzy's catalog, and included a generous selection of 1980's Blizzard of Ozz ("Mr. Crowley," "Suicide Solution," "Crazy Train"). Things were hit and miss: The slow-burning "Road to Nowhere" and fist-pumping "I Don't Want to Change the World" (both from 1991's No More Tears) succeeded; so did the spooky, late-'80s pop-metal snarl "Fire In the Sky." Sabbath's "Iron Man" was shaky and teetering on off-key, although "Fairies Wear Boots" was solid and appropriately sludgy. "Let Me Hear You Scream," from last year's Ozzy solo album, Scream, wasn't bad - it just sounded calibrated for rock radio in the modern era. (In other words: lowest common denominator.)

Osbourne wisely surrounds himself with talented players; in a sense, they comprise the best Black Sabbath tribute band around. Long-haired, stoic keyboardist/guitarist Adam Wakeman - son of Yes' Rick - stood in the back and coaxed out funeral organ, prog wizardry and other synth flourishes. Guitarist Gus G., all flash and wind-blown hair - seriously, he had an industrial fan onstage to achieve the perfect rock-god look - handled the heavy riffage with ease. Bassist Rob "Blasko" Nicholson and drummer Tommy Cluefetos, meanwhile, have both spent time playing with Rob Zombie, which kept the music sounding fresh. But while Cluefotos held the music together, his style - based on hardcore-esque speed and muscular metal - felt like an odd fit on some of the slower, sludgier tunes. He never quite found the seedy groove needed to give some of the Sabbath material its evil sheen.

Still, hearing Sabbath tunes played live- including the 40-year-old-plus tune "N.I.B." and comfort food such as "War Pigs" - never gets old. And the setlist didn't just stick to the better-known side of Ozzy's catalog, which was impressive. In that sense, it was a pleasure to remember just how influential he's been. (For instance, Poison's "Nothin' But a Good Time" is a complete rip-off of "Flying High Again.")

But what's more important is seeing Ozzy. He's more of a draw than his actual music - as evidenced by the number of kids at the show who weren't even born when The Osbournes started on MTV. He's a relic, the wild man who shouldn't have outlived his vices - but did. It's somewhat reassuring that the lovable Grandpa Simpson of metal is still shuffling around onstage, spraying the audience with a foam hose, mugging like Dr. Frankenstein, making zombie faces and hopping up and down at the mic stand like an excited kid. It's a marvel to hear that cheerfully indecipherable speaking voice suddenly morph into a copper-plated bellow.

He's the "fucking Prince of Darkness," but he also has a sensitive side: He kept whipping the crowd into a frenzy with goofy hands-above-head claps - and said to the audience, with much sincerity, "I've been doing this 43 fucking years... you're like family!"

In light of that, it's hard to find fault with the show - even though occasionally everything on stage felt chaotic, Ozzy's jumping and mild calisthenics grew a little tiresome and the meedlee-meedlee-mee riff flamboyance wore out its welcome. (Purists might have even walked out - if they were even at the show at all.) But consider this: Being able to scream the chorus to "Bark At the Moon" as if you were in your car listening to KSHE - except that this time, Ozzy himself was singing right in front of you - is an irreplaceable experience, no matter your age.