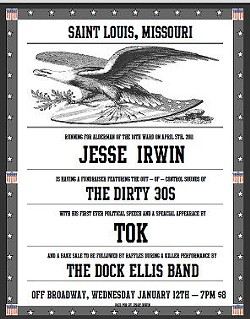 Jesse Irwin is no stranger to political causes. The solo artist and member of the Dock Ellis Band has crusaded against red light cameras for years now, particularly with the group Missourians Against Red Light Cameras. It's a logical progression, then, that Irwin has decided to run for public office. He's thrown his hat in the ring for the Alderman position in the 10th Ward for the April 5 election. (This area encompasses all or part of neighborhoods such as the Hill, Tower Grove South and North Hampton.) Irwin is hosting his first fundraiser (termed a FUNraiser) tonight at Off Broadway at 7:15. Bands performing include TOK, The Dirty 30s and Irwin's own Dock Ellis Band; a bake sale, 50/50 raffle and a silent auction are also on the docket. Admission is $8 for 21-plus, $11 for those under 21.

Incidentally, Irwin has a very simple platform on which he's running:

1. I want to make your dealings with city hall less frequent and more pleasant. I'm open to amending or eliminating an ordinance if enough people have a problem with it.

2. I won't support any measure that makes it harder to open a business, fix a house, organize an event or do any other positive activity in the city of St. Louis

3. I won't support anything that makes it more expensive to live here

More on Irwin's run for office as the campaign unfolds.