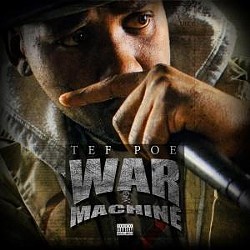 Yesterday, Tef Poe talked to us about War Machine, his latest album. Below, he reveals what he's up to this year -- and some new local artists we should keep an eye on. Tef will be playing at Cicero's on Friday, January 14, with Family Affair and the Chalk Boyz. He'll also be opening for Freddie Gibbs on January 20 at the Gramophone.

A to Z: What does 2011 have in store for you? Tef Poe: I'm already slated to release a few projects, just sorta play wing man for The Force movement. I realize how much of a figurehead I've grown to be, and with the release of this project it's became even more evident. I'm going to continue to push War Machine and just lend a hand to my family members where I can. Rockwell Knuckles is prepping the release of his new album, You're Fucking Out and I'm Fucking In. You're most definitely going to hear me on his project. Myself and Rocky are actually working on a EP together entitled Prestige Worldwide, not sure when we'll release it, but I promise you it's coming this year. I am also working on a EP with my older brother Black Spade. I was actually slated to release this before War Machine. I dont have a title for it yet because I'm too indecisive, but look for it around late February, early March.

I have a ton of songs left over from War Machine so I'm just going to drop a sleeper project soon with basically no promotion completely out the blue. I have videos filmed for "Crazy" and "Out the Kitchen" thanks to Joe Lombardi of Aztech Films.

I intend on going more viral this year than I ever have. If my life doesn't lead me to the place I want to be with my music in the next 365 days, I made a promise to myself that I am going to jump over the Chain of Rocks bridge and end it all. I'm going to be working more with Theresa Payne lending a helping hand on her new project wherever I can. I know myself and Nato Caliph will do more work together. I've learned that people actually want to listen to my music, so this year I'm going to release more music than I ever have. I plan on swimming the English Channel completely bare chested.I'm going to buy the Elephant Man's bones and sell them to the Iranians in hopes to acquire nuclear technology secrets gifted to them from Russia. In November I will announce to the world that I will be Sarah Palin's running mate in her bid to become the first female president of the United States -- but prior to all of this I'm dropping another full-length solo album in the summer time. [Laughs]

Have you heard any new, up-and-coming talent in the city we should be looking out for? I'm really routing for this kid named T Prince, I think he's the future -- haven't seen a rapper with his ability and storytelling grace come along in awhile. If I had my way he'd be in The Force no questions asked. I also really like these guys Whiteout and RT Faq from the east side. My younger brother Ice Pack Ill aka Yung Ill has taken the national battle rap circuit by storm I'm very proud of what he has accomplished. Dame Dash has been quoted saying "he's money in the bank." I'm not that much older than a lot of these new breed local rappers, but I jumped off the porch so early because Black Spade is my older brother. I'm glad my name holds some sort of weight in St. Louis hip-hop and a vouch from me can actually do something for someone in terms of getting other people to pay attention to them. I graduated from the same exact class as people like Vandalyzm and Rockwell Knuckles, so my job was a little bit harder.