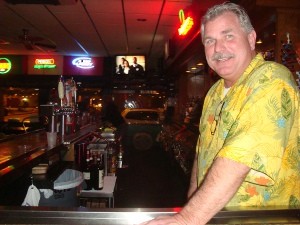 As expected, one week into the smoking ban, and the ashtray wars are on! Yesterday, local blogger/gadfly/development activist Steve Patterson launched a grenade at one particular bar owner who he thought might be gaming the system. That bar owner? None other than Alderman Joe Vollmer, who for 22 years has run a joint on the Hill called Milo's.

Patterson measured the outside of the lawmaker's building using the website Geo St. Loius and then took a look at his menu. His initial determination was that Vollmer was in violation of his own law. "No way does Milo's meet the criteria for an exemption," hypothesized Patterson on his blog. Comments began pouring in.

Well, it turns out that Vollmer did have his building inspected, and he does meet the city's square-footage and food-sales specs, which Patterson now acknowledges after speaking to the alderman later in the day. (His blog has since been updated.)

We checked in with Vollmer, who says he has no hard feelings toward Patterson. The new law, he says, has everyone confused. For instance, do bar snacks constitute as food? What if a bar meets food-sales criteria one year, but not the next? What happens when a kid eating in an outdoor garden needs to take a leak -- is he allowed inside? And will State law eventually override our little municipal ordinance, which it has the power to do?

All these issues need to be debated, says Vollmer, as he scans the crowd of patrons at his business. (Roughly half of them are smoking.) Despite the business that smoking has given him over the years, the lawmaker might decide to change his policy. Earlier in the day, he had to turn down a family of regulars whose party included kids. "To tell regulars they can't come in -- that takes a different mentality," says Vollmer, shaking his head. "Our law should mirror the county if we're going to move forward as one area and keep the attention of tourists," he says. (The city bans people under 21 years old from entering smoking bars; the county does not.)

As of now, city bars measuring less than 2,000 square feet are in the exemption club, as long as their food sales do not exceed 25 percent of their overall sales. Simple, right? Well, not so much. As we reported last week, bar owners who don't meet criteria can continue to skirt the rules until enough complaints drive the Department of Health to their doorstep.

The situation isn't helped by the fact that there still isn't a public list that makes it clear which bars are exempt. Last week, we mentioned that the Department of Health planned to post on its website such a list as soon as possible. That still hasn't happened. We checked in with the city again to see what gives. Kara Bowlin, Mayor Slay's press secretary, explains that no bar can officially be labeled exempt until the Department of Health squares its application data with the city's Excise Division, which tallies food and drink sales. That takes time, she says, and she cannot give a timetable for the process to be completed.

Until then, bar owners should watch out for Patterson, who has taken it upon himself to assume a vigilante's role. "Much of the enforcement of the smoke-free laws in our region depend on concerned citizens speaking up when they see violations," he tells A to Z. "We are still early into the new law, so I expect some businesses to see how much they can get away with. This is fundamentally unfair to those businesses that are in full compliance.

"Seeking compliance isn't going to make me popular with some business owners, but popularity is not my goal."