As the old saying goes, no news is good news. However, no local news makes for a rather-boring music section - or music blog, as the case may be. If you aren't a regular visitor to this here music blog, definitely become one: We compile breaking news, show reviews and local tidbits here during the work-week (and sometimes even on the weekend). Out of all of our online coverage, however, the following ten stories stood out from the pack.

10. Guy Breaks Up With His Girlfriend Live on the Radio It's not often that an Internet sensation happens right in our own backyard. But that's just what happened before Valentine's Day, when a caller broke up with his (allegedly) cheating girlfriend live on Woody and Rizzuto's morning show. The audio clip of the broadcast exploded all over the web soon after it aired, putting the Point's (105.7 FM) personalities on the national map.

9. The RFT Music Showcase moves downtown After a long tenure in the Loop, the RFT's annual all-day Music Showcase headed downtown. For this year's model, bars and clubs along Washington Avenue hosted nominees in a variety of genres, while two outdoor stages also showcased talent during the day. Photos from the event Winners 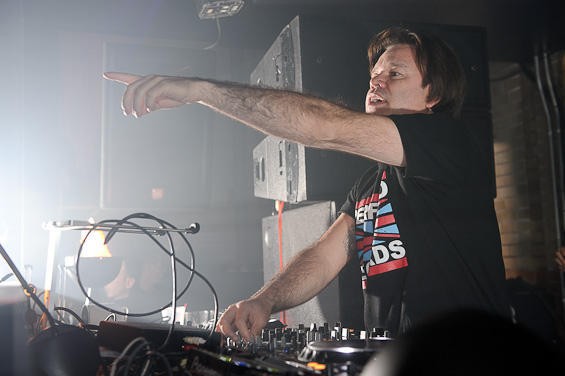 8. A Relatively Stable Bar/Club Scene Unlike other years, 2010 was a relatively stable one for the local club/bar scene. The biggest change was the closure of HOME Nightclub, which left a void in the DJ/dance-music scene. (A revived Europe Nightclub stepped in to pick up the slack, hosting Paul Oakenfold and a New Year's Eve Crystal Method DJ set.) The most controversial events, meanwhile, concerned the downtown club Lure, which had its liquor license revoked amid concerns about crimes allegedly perpetrated by its clientele. But there were some bright spots. The Cherokee Street watering hole El Leñador began hosting live music, and the Old Rock House ramped up its touring-band schedule; acts such as OK Go, Frightened Rabbit and Midlake played well-received sets. On the bar side, the punk/pinball/PBR mecca the Silver Ballroom opened, as did called a bike-friendly place in the Grove called (appropriately) the HandleBar.

7. Gone Too Soon In early 2010, the KDHX (88.1 FM) family suffered a tremendous loss, when long-time operations manager Larry Weir died after suffering a traumatic brain injury on New Year's Eve 2009. The station ensured that his memory will live on, however: In August, KDHX announced that it was gifted a building in Grand Center that most recently housed the Creepy Crawl. Its eventual name: The Larry J. Weir Center for Independent Media. In August, the music community suffered another great loss, when Fattback's Dave Hagerty died due to injuries sustained in a car accident. (The band Deer Tick, who was playing in town the week following the accident, donated a portion of the proceeds from their show to a Hagerty memorial fund.) And in October, SLU graduate Patrick Wessel, a huge fan of and video-maker for the band Jumbling Towers, died after a battle with cancer.

6. Clownvis Presley on America's Got Talent The local music/performance community lost one of its most colorful participants in the spring, when Clownvis Presley left St. Louis to find fame and fortune in L.A. The former materialized almost immediately: Over the summer, Clownvis appeared on the television show America's Got Talent, where he managed to insult judges Sharon Osbourne and Howie Mandel after butchering "Old McDonald Had a Farm." Naturally, America loved him - and he appeared on the season finale lip-syncing to Black Eyed Peas and was lauded by rock group the Goo Goo Dolls. Not to be outdone, Clownvis also recorded a Christmas album.

5. Smoking Disappears from Bars and Clubs In late 2009, voters approved an indoor smoking ban in St. Louis County, which meant that a Board of Aldermen bill banning smoking in St. Louis City also became law. (The ordinances force most establishments to go smoke-free inside, although there are plenty of exceptions and loopholes present in the legislation.) The ban wasn't scheduled to go into effect until January 2011, but bars and clubs such as the Firebird, the Pageant, Old Rock House and Mangia Italiano all started prohibiting indoor smoking this year.

4. Lady Gaga The pop princess came to town not once but twice in 2010. Her January show at the Fabulous Fox Theatre sold out months in advance; those lucky enough to snag a ticket experienced lasers, gyroscopes, choreographed dance moves and plenty of sass. Her second concert of the year occurred at the Scottrade Center in July. This time around, the spectacle was even greater - from the fans' elaborate fashions down to Gaga's costumes and grandiose stage props. The July 17 show also drew protesters from the Westboro Baptist Church. (The organization was supposed to picket the Fabulous Fox show, but nixed that appearance due to weather.)

3. Camp Zoe Under Fire Salem, Missouri's Camp Zoe is the long-time site of the Schwag's occasional musical gathering Schwagstock. But its future as a concert site came into jeopardy in November, when the DEA, Missouri State Highway Patrol and U.S. Attorney's Office noted their intent to seize Camp Zoe under asset forfeiture laws. A four-year investigation alleged that law enforcement "observed the open sales of cocaine, marijuana, LSD (acid), ecstasy, psilocybin mushrooms, opium and marijuana-laced food products by individuals attending the music festival"; drug use was also observed. In addition, the highway patrol made multiple arrests as the result of roadblocks set up on the way to Camp Zoe.

2. LouFest Naysayers scoffed that it couldn't happen - "it" being a multi-day music festival in St. Louis, specifically right in the middle of Forest Park. But after all was said and done, the inaugural LouFest was a rousing success. The two-day event attracted bands such as Built to Spill, She & Him, Titus Andronicus and Broken Social Scene, while sets from up-and-comers Carolina Chocolate Drops, Airborne Toxic Event and a solo set by Belleville native Jeff Tweedy thrilled the thousands of people in attendance. LouFest was so successful, in fact, that tickets for 2011's version are already on sale - and pre-sale passes sold out in about two weeks.

1. Kings of Leon's Pigeon Gate Was there any doubt that this was the top story in St. Louis this year? (Answer: No.) In fact, the incident reverberated around the globe; the U.K. music bible NME even mentioned the incident on its cover. To recap: Three songs into its July 23 show at the Verizon Wireless Amphitheater, pigeons with digestive-system problems sent the band packing. (Translation: streams of bird poop cascaded from the rafters.) Refunds were issued, shit jokes multiplied, someone started a fake Twitter account for the pigeon, Geddy Lee and Sammy Hagar mocked the band - and in the end, Kings of Leon ended up doing a discount-ticket show on September 25 at the same venue.