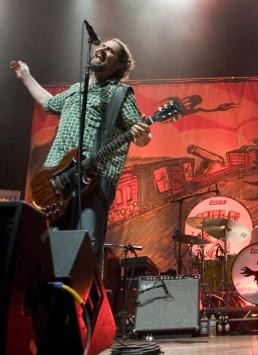 After looking over the (very helpful) comments to my blogpost asking for the year's best concerts, I started perusing our show review archives. I got as far back as July before the archives ended -- which meant that in the past six months alone, we've done over 100 concert reviews. I realized then that choosing ten -- or even twenty -- top concerts from the year was going to be impossible. And so over the next few days, we're going to be counting down the top 31 St. Louis concerts of 2010. (Why 31? Well, there was an extra show or two I just couldn't omit.) Look for the rest of the concerts to be unveiled in lists going live tomorrow and Wednesday right here on A to Z. Part two of this list, #20-11, is here; the top ten is found at this link.)

"The only people having more fun than the Pageant's audience last night were Tegan and Sara Quin." -- Annie Zaleski Review Slideshow

"The juxtaposition of the lighthearted and the refined summed up Sting's magnificent show with the Royal Philharmonic Concert Orchestra." -- Annie Zaleski Review

"Jones' voice, so emotive and honeyed on record, draws from the audience's energy and transforms into a primal soul-banshee howl." -- Annie Zaleski Review 25. King Khan and The Shrines, 2720 Cherokee, October 3, 2010

"Wearing a shiny red, paisley-patterned smoking jacket that looked like it came straight from Hugh Hefner's closet, Khan wailed and moaned and yelped as if the only exorcism capable of returning him to his mortal form was rock and roll." -- Keegan Hamilton Review

"(Lead singer Shalev) saw me writing furiously in my notebook and snatched it out of my hand, and probably glimpsed the very word "Moses" before I had occasion to grab it back, afraid he'd lob it into the sweaty mass of bodies if he didn't like the biblical comparison." -- Diana Benanti Review Slideshow

"Even if you're not a Pink Floyd fan, the tour is a technical marvel worth experiencing, a show full of well-choreographed special effects and arena spectacle." -- Annie Zaleski Review Slideshow 22. Black Lips, The Firebird, April 7, 2010

"They screamed and spat and and lived up to every insane expectation -- and then some." -- Keegan Hamilton Review Slideshow

"There are very few certainties in life, but there's one thing you can always count on: If Athens, Georgia's Drive-By Truckers are in town, you have the opportunity to see one of the best rock & roll shows money can buy." -- Michael Dauphin Review Slideshow