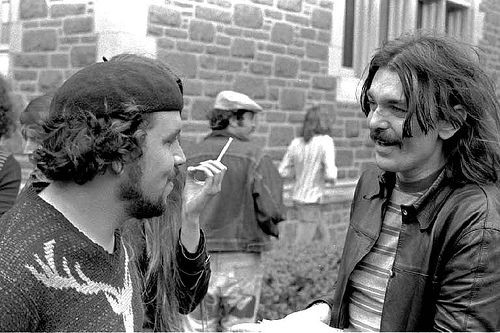 On Friday, Don Van Vliet, a.k.a. Captain Beefheart, died at the age of 69. Tributes and remembrances have been pouring in since Friday, from a reprint of a 1980 Lester Bangs story on the man to a moving LA Times piece by ex-RFT staffer Randy Roberts.

Close to home, remembrances of Captain Beefheart also abound. That picture above is of Tom "Papa" Ray and Vliet, taken at Washington University in the mid-'70s. According to a post on beefheart.com, avowed fan Ray was beyond thrilled to meet the man himself.

I recall in 1970 thinking Lick My Decals the greatest music being made. So, to meet him finally was, well---I don't think there was anyone in the world I would have rather met.- He was wonderful and sweet, playful and full of verbal tricks. We talked about Howlin Wolf and Ornette Coleman, and he inscribed my copy of Trout Mask w/ some of his lyrics....what a day. A real blessing.

Beefheart came to St. Louis other times, too. RFT art director Tom Carlson attended the May 13, 1975 Kiel Auditorium show with Captain Beefhart and Frank Zappa, who were touring together. (Live tracks on the Zappa/Beefheart album Bongo Fury were recorded a week later in Austin; the LP was released in October 1975.)

"This was the last tour of the remnants of very fusion-y Mothers who worked with Zappa starting with Overnight Sensation," Carlson says. "Beefheart together with Zappa was a contrast in style of weirdos -- CB's surreal stream-of-conscious rants interspersed with FZ's arrested-adolescent obsession songs."

He recalls that opener Styx wasn't quite as well-received, however.

"Ron Powell, the hot-shit promoter in town at the time, came out during 'Lady' and told Styx, 'Get off the stage. You guys suck!' Truer words were never spoken."