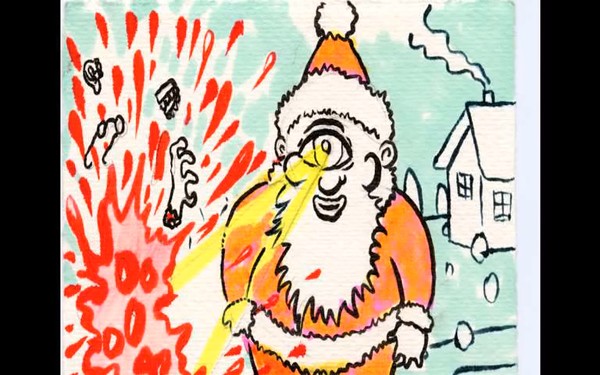 We're all force-fed holiday cheer from Halloween through New Year's, and even if you really, really love Christmas music, hearing the same old standards and modern classics over and over again can begin to fill you with exactly the opposite of holiday cheer. To avoid the monotony of those soft-rockin' jingle-bellin' classics, we present ten non-traditional holiday songs that are actually pretty good.

This track was released on The Christmas Gig, a fourteen-song album produced by Target and available for free download here. The whole album is worth a listen, but "You'll Never Find My Christmas" is by far the most fun.

...it even inspired a cute Target commercial.

Grandaddy's adorably un-Christmasy-yet-traditional Christmas song was originally released as a promotional single and later appeared on It's a Cool Cool Christmas in 2000. The song was re-written to concern itself heavily with Mr. Parsons.


"In the meadow we can build a snowman and pretend that he is Alan Parsons
He'll say 'Have you listened to my new band?' and we'll say 'No, but we really like that one song
It goes, 'Time keeps flowing like a river''"


Listen to it here.
3. Tom Waits, "Christmas Card From a Hooker in Minneapolis"

Really, this isn't a holiday song, per se. Tom Waits essentially reads you a letter billed as a Christmas card — but, it's great, and it has Christmas in the title, so why not?

Death Cab's cover of "Christmas," a song written by Phil Spector and originally made famous by Darlene Love, was recorded for Maybe This Christmas Tree. The sweet innocence of Gibbard's vocals emphasize the earnest melancholy in the lyrics, making it a very different retelling of Love's original upbeat version.

Devo just wants to say Happy Holidays and not offend...

Shonen Knife does Christmas as only Shonen Knife can on "Space Christmas." The song was originally recorded as a single and later released on Knife's The Birds & the B-Sides. Listen to it here.


7. Julian Casablancas, "I Wish It Was Christmas Today"

It all started with Horatio Sanz, Jimmy Fallon, Chris Kattan and Tracy Morgan's performance on Saturday Night Live. The super-catchy, simple Christmas song surely would have gone viral had it been performed in the age of Youtube.

Recognizing this, Fallon rejuvenated the song (with some help from Sanz, Julian Casblancas and the Roots) last year:

Leave it to Beck to take one of the more traditional and religious holiday songs and make it barely recognizable in a totally awesome way - he takes out the Christmas and replaces it with seven minutes of glitchy "Hanukkah robot funk." Listen to it here.

The Knife does not in any way seem like a band that would ever make a Christmas song. The result of them doing so is a delightfully weird experiment that doesn't pigeonhole itself as strictly a "holiday song," the way many do. Listen to it here.

Rufus himself is a rather untraditional character, so it seems somehow appropriate to end this list with him doing possibly the most traditional-sounding song on this non-traditional list (whew!).


Here's Rufus talking about the meaning of Christmas (aw) and singing "Spotlight on Christmas":