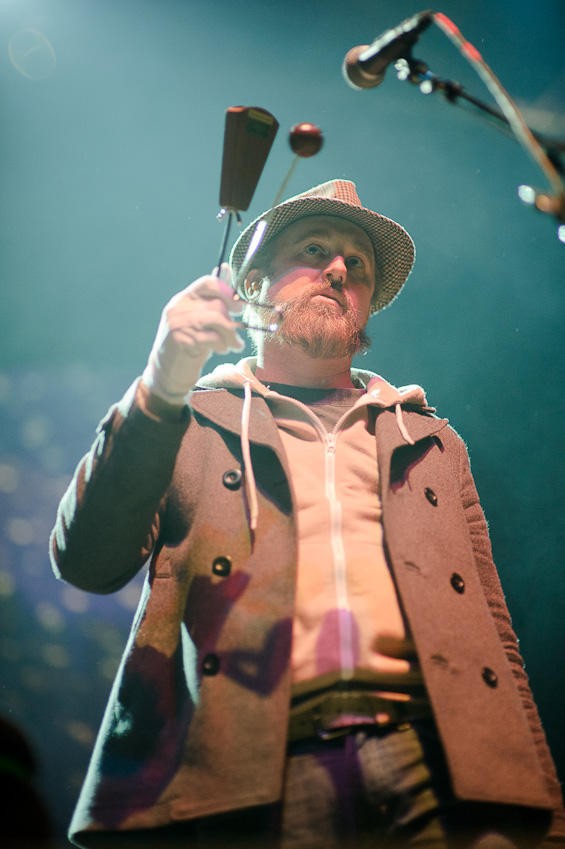 In the opening song of Cake's performance last night, singer John McCrea stated, "We are building a religion." Judging by the response from the claustrophobically packed crowd at the Pageant, the band was off to a good start. The audience cheered to the opening chords of almost every song not on the band's forthcoming Showroom of Compassion, hung on to every word McCrea sang or spoke and, as he noted, provided "excellent background vocals" throughout the night. For the most part, Cake earned this reception with a tight show which skillfully mixed old favorites with new material and engaged its lively audience with plenty of wry banter and sing-alongs.

View a slideshow of photos from Cake at the Pageant

The show got off to an excellent start with the dissonant strut and exotic synths of "Comfort Eagle," which gained energy as it chugged along. This made it all the more surprising when Cake followed it up with the slow "Sad Songs and Waltzes" and instrumental "Arco Arena." It felt strangely early in the night to hear these, but the audience ate it up all the same. The group continued its odd pacing when it later played three new songs consecutively. It helped that the first two tunes sounded like classic Cake, featuring funky grooves, twangy riffs, McRea's detached singing and sprinklings of mariachi trumpet. (The third found the band in waltz mode.)

Indeed, Cake did a commendable job of translating its unique sound to the stage. The band members hit all their marks like the seasoned pros they are -- and while they didn't burst with energy, they played with a focused intensity that brought their songs to life. Xan McCurdy in particular has mined the perfect guitar tone that features just the right amount of twang and is thick without being chunky. McCrea's detached and sarcastic air extended to his banter - after rallying two halves of the crowd against each other to see who could sing louder and be better, he asked why everyone couldn't just get along. At one point he gave away a tree to the first person to correctly identify the length of the civil war.

Perhaps the same quirky sensibility that inspires Cake to take part in stunts like this is also responsible for the night's abnormal pacing and the decision to split the show into two sets separated by a 15-minute break. Taken as a whole, the 19-song concert wasn't much longer than a normal headlining set and didn't need an intermission. The break sapped some of the group's momentum and though kicking off the second set with "Short Skirt/Long Jacket" helped regain it fast, it was an unnecessary problem to fix.

Bizarre choices aside, it's hard to be disappointed with the show as a whole. The band nailed its well-chosen sets and the crowd's collective enthusiasm was contagious. By the time McCrea divided the crowd again to sing the dueling hooks of "Sick of You," the entire audience was on the same joyous wavelength. As expected, "The Distance" was the killer closer that sealed the deal, ensuring that all the fans that got up and got out of town left the venue happy.