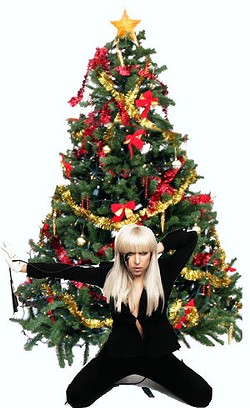 (In December, we'll be posting holiday jams for your enjoyment. Have any favorites you want featured? E-mail me.)

Two months after the release of her debut, The Fame, Lady Gaga released a single called "Christmas Tree."

The bizarre, euphemism-rich, nontraditional take on Christmas didn't gain much notice -- at least for something Gaga-related -- and it was never released domestically beyond the single.

Another album, several huge videos and a few controversies later, the 2010 Artist of the Year's track resurfaced and appeared on Now That's What I Call Christmas Vol. 4, released this fall.

Unfortunately, there's no video for the song (the "video" below is a still image paired with audio). This allows us to instead dream of a Gaga Christmas, which almost certainly involves skimpy leotards, outrageous shoes and glitter. Enjoy!