More so than any other form of black wax, the vinyl 78 has endured, preserving an essential portion of 20th century American music, culture and history. It's ironic, then, that you're more likely to find 78s collecting mold in a landfill than you are to find the hugely over-pressed LPs of the mid-century. That's why some collectors, including Rum Drum Ramblers guitarist Mat Wilson, consider the search for 78s is the ultimate treasure hunt.

We met up with Wilson, who is also a guitar tech at J. Gravity Strings and occasional record store clerk at Vintage Vinyl, and toured both his collection of 78s and vintage guitar workshop. There, we discussed his punk roots with Nineteen, the Smithsonian Folkways and the first electric guitar recordings.

Last Collector Standing: With the Rum Drum Ramblers you play your take on traditional blues. Do you find yourself collecting a lot of early blues records? Mat Wilson: Big time! What I'm finding now is that I'm stumbling across a lot of jug bands and string bands that remind me of my band now. Not necessarily bands where we were going for their style -- I'll discover a band that's a late '20s blues group that reminds me of what we do. Our sound has already been developed on its own. It's a collection of what we're already into, but it's cool to find old records, especially old 78s of old jug bands and string bands that I didn't know about that sound dead-on, exactly what we are going for.

I'm really into 78s. Nowadays, it's really hard to stumble across a 78 that isn't already cataloged and documented well. With the blues, it's kind of like a search for buried treasure. You know what's out there that's survived, and you go looking for it.

How do you normally go about looking for old 78s? Besides searching through sales, the first really amazing [hunt] I got to do was I went on a record buy with Phil Harris. He used to work at Vintage, and I got to go through a north city basement. When stuff turns up that hasn't seen the light of day, a lot of times you find some cool stuff. This was a house in north St. Louis. The basement hadn't been touched. This one area was all 78s.

What type of records did you find? [We found] a lot of post-war, late '40s into the early '50s, electric blues. Chess label stuff, and more importantly Cobra, which was a very short-lived [Chicago] label. A lot of those Cobra 78s didn't survive at all. In St. Louis, it's one of the "untouched cities" on 78s. It was a big music town so a lot of these records "made it" here. A lot of other cities are already picked over.

In that basement I stumbled across a Cobra 78 of Otis Rush's Violent Love. It's one of my favorite songs, so that was pretty awesome. I'm into early electric blues. You find a lot of singers and piano players, but it is a lot harder to find an early electric blues guitar record, specifically where the guitar is the main instrument. That's my obsession.

Finding Ike Turner and the Kings of Rhythm 78s is awesome. Though they were from here, they had to record in Cleveland or Memphis. The stuff "made it" here, but that type of stuff you don't see as much of. I have the Rocket '88 78.

It's like if someone would put a value on a painting because it had a certain characteristic that only an art critic would know about. I rate my 78s like that. If there's a guitar lick on a 78, just one that inspired me to cop it for myself or inspired me to write a song around an idea to go off of it, that one is special to me. As a guitar player, I have little pieces of my playing in each 78. That's the most special part of my record collection.

When you were a teenager you played in the local punk rock group Nineteen. How did you make the transition from punk to blues, and how did that affect your record buying habits? When I was real young, I was buying punk records and classic rock. I enjoyed vinyl at a young age so I was always collecting. I've always had more records than CDs. I got into blues when I was probably fifteen -- real hardcore. It was John Lee Hooker, Muddy Waters and Howlin' Wolf. Those three.

I realized that early blues, pre-war or post-war, was punk as fuck. In a lot of ways, it was angrier. It's all struggle music, and I realized there was a greater struggle being represented through blues.

Do you still identify with your punk records? While I won't listen to my crusty-punk records like the Exploited and Crass, I will all day long listen to my Circle Jerks, Angry Samoans, Dead Kennedys. That stuff is very much a part of who I am. A lot of it I'll always love because it's sentimental -- and I've got all my Rancid records that I'll never get rid of because they represent a huge block of formative years in my life. Almost every record I've ever bought I still own. I've sold records a couple times just to buy more. If anything, it's like a library for me. I like to have it as something to refer to, even if it's not something I enjoy.

Do you remember the first music you ever bought? The first music I bought was Elvis music. I was obsessed with Elvis when I was seven or eight, and that's when I started playing guitar, when I was eight.

Why were you obsessed with Elvis when you were eight? Because he was the King, man! (Laughs) It was the ultimate rock n' roll. I didn't even understand what it was, but it was a really good gateway into all the Sun Records stuff. At a young age I knew about Johnny Cash, Roy Orbison, the Everly Brothers and all this stuff that is now really important to know about in general music history. Elvis is an amazing gateway for a lot of people to get into a lot of different stuff.

When you were in Nineteen you released a split seven inch with Rock Over London? Did you ever think that because it's a vinyl release that it might one day be a collectible? What were your thoughts going into a vinyl release? We did it real DIY. We dumpster dived for the paper and silkscreened the covers. Split the cost with the other band. We recorded for free and didn't master it. We just had it pressed. We did photocopied inserts and kept the cost down, and sold them for next to nothing. 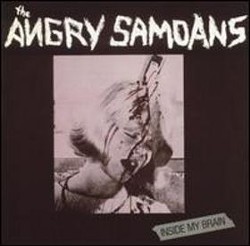 It's interesting to think: Now more than ever in the history of time there's more things being documented. If you imagine a few hundred years from now, we are going to have a lot more knowledge about this time than we do about a few hundred years ago, through film and audio. I was proud to put something out on vinyl that will possibly stand the test of time. If anything it was just cool. Everyone knows it's cool to hear your own band on vinyl.

You also work at the guitar shop J. Gravity Strings. Working around guitarists all day, do you ever see a crossover of the collector's mentality? Definitely. In fact, there is a record collector who comes in who collects guitars, and we talk all the time. We're into the same type of guitars and the same type of records. We'll go from talking about a record, to a guitar, to another record, to a guitar.

I've made the correlation that I like to have the old Kay guitars, Harmony guitars, Silvertone guitars, stuff that is on these records [that I collect]. I'm a fan of Charlie Christian. I love his tone. His recordings and his tone are revolutionary. He was the first recorded electric guitar player. I had the chance to play the same Charlie Christian-style Gibson on the Rum Drum record. I was able to take one of my favorite recorded sounds and try to duplicate it or translate it to our sound.

It's unfortunate that a lot of records end up in dumpsters. For that record collector out there who knows what I'm talking about, it sometimes feels like it's fucking fate when you find "that record," especially when it's a 45 or 78, because it's just one song. It's a diamond in the rough, as opposed to an LP. That's why I moved out of it. I was tired of finding Black Flag records. I used to be like, "Ohh, I needed that!" Now it's like the record itself isn't sentimental, because there are ten million of them out there, but finding a one-of-a-kind record is like an artifact. It's sort of archeology.

Then me and my friend Ryan, who's in Rum Drum, take all of our finds and put them on CDs and burn 'em for everyone. It's not like we're hoarding everything. It should be shared. It's something that is like, to me, potential energy. When I see a record, I see a song that wants to be played. It's not like some hierarchy record collecting-thing. We're utilitarian.

Another favorite part of my record collection right now is I like to collect by label as opposed to band. I've been collecting all these Smithsonian Folkways recordings. I've got to show you this one. It's just fucking awesome!

It's just stuff that the Library of Congress was recording, because they were recording stuff. I've got two of these now. Just Indian tribes from the '60s. Anything from Woodie Guthrie, to Lead Belly's prison recordings, to a random tribe's rain dance that, if it wasn't recorded, it would have just echoed into nothing. The fact that this stuff survived is why I try to amass it.

So is traditional blues music meant for the digital age? It would die if it wasn't digitalized. The digital age is amazing. I can't say, "The digital age sucks," because I'm a traditionalist or a purist. It is what it is. I'm not going to say I live in a different time. I don't. I live now, but I'm collecting as much as I can from my favorite parts of all the various eras. I'm just trying to be a safe-keeper of these things. Having 78s not be digitized would mean they'd be lost. I think that now, more than ever, this stuff should be readily available.