Countdown to Tron at the Firebird 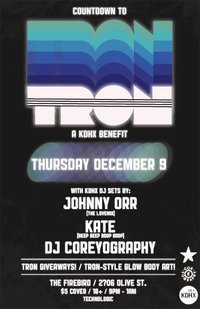 Tron: Legacy -- the sequel to the groundbreaking 1982 sci-fi film -- is in theaters on December 17. The Daft Punk-penned soundtrack, however, is in stores now. In honor of both these events, several local DJs are throwing a Countdown to Tron blacklight dance party at the Firebird tomorrow night. KDHX programmers Johnny Orr (The Love Mix) and Kate (Beep Beep Boop Boop) and DJ Cor(e)yography are your hosts; the event also promises "glow-in-the-dark, Tron-styled body art by Firecracker Press' Matty Kleinberg, giveaways (including copies of the graphic novel, Tron: Betrayal provided by Star Clipper), Tron video game, and of course some Daft Punk." Good enough! The event starts at 9 p.m., there's a $5 cover, and all proceeds go to KDHX.