Show Review: Still Be Around: A Tribute to Uncle Tupelo, Off Broadway, Saturday, December 4

When big events hit St. Louis, like Loufest, the first question is always, "Will Uncle Tupelo reunite for this?"

Probably not. Instead, fans got something just as special at Still Be Around: A Tribute to Uncle Tupelo. Instead of a nostalgic trip back to the early '90s, the audience got a glimpse of just how deeply rooted Uncle Tupelo's influence runs, and how it's shaped local music in the past two decades.

Troubadour Steven Chosich opened the night, accompanied by Melody Den's Jerry Baugher on back-up guitar and harmony vocals. Aside from opening with "Anodyne," "Slate," Chosich eased into the tribute with the bare bones of Uncle Tupelo's March 16 - 20, 1992 album, with covers-of-covers: the Louvin Brothers' "Atomic Power" and a stark, beautiful take on the traditional "Satan, Your Kingdom Must Come Down." With his clear, solid voice, Chosich closed with the appropriate "Wipe the Clock."

The Vondrukes paid homage to Uncle Tupelo's punk roots with a raved-up take on "That Year." The song started with a simple pedal steel riff before turning loud, raucous and loose. "Year" dictated the tone for the rest of their set, which included an equally boisterous rip on "Train" and ended with a blazing finish courtesy of "Outdone," full of speed and feedback.

With the first appearance of banjo and fiddle, the Dive Poets tore into a set heavy on Uncle Tupelo's roots classics, starting with a version of "Acuff-Rose" accented by Anna Moffatt's fiddling. "Gun" had depth which exceeded the original, thanks to the three-part harmonies anchored with two deep male voices and Moffatt's lilt. While completely different from Jeff Tweedy's slight, desperate voice in the original, it was just as authentic and brutal. Later, the band achieved the same effect with its take on "New Madrid" and "I Got Drunk." The band stayed true to the originals without being copycats and gave its personal stamp to the songs while honoring what made the originals special in the first place. In other words, this is exactly what a tribute should do.

Before he began, Melody Den's singer Marc Chechik warned that the band hadn't rehearsed much. Although probably not a good admission to make, Melody Den made it work. Opening with a rough and loose version of "Graveyard Shift," the group embraced the improvised ethos of the originals. "Whiskey Bottle" prompted a singalong from the crowd, with the band sinking into moments of near-silence followed by guitar accosts as bright and searing as a cheap bourbon hangover. They followed with a somber version of "Screen Door," replacing the song's innocent joy with a quiet sadness conveyed with brushed drums and rich slide guitar. Same words, same notes, but with an entirely different meaning, all courtesy of the band's wise decision to change the tone. It was one of the most compelling songs of the night.

Corey Saathoff's newest band, the Trophy Mules, muscled through "Fifteen Keys," noting "That's a beast of a song to learn to play." But they handled it well. Before "Sauget Wind," he asked for the East Siders to represent, then raged into the song, replacing Jay Farrar's emptiness with more angry bursts of feedback, creating a feeling known by anyone who's driven through the industrial wasteland of the Metro East town. They ended the set with Larry Rosenhoffer taking lead vocals on "We've Been Had" and an energetic romp through the Doug Sahm duet, "Give Back the Keys to My Heart." 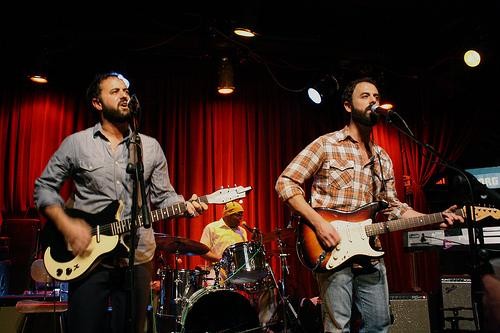 Bob Reuter spent most of his set telling off-color stories of questionable origin about his interactions with Uncle Tupelo back in the day. He stuck to songs by other artists covered by Uncle Tupelo - "Are You Sure Hank Done it This Way," which he claims he covered before they did, and Neil Young's "Down By the River." The bulk of his set focused on a tale of getting kicked out of a motel in Ames, Iowa, with the band, and Tweedy recollecting a massage he received from a transvestite.

Brothers Lazaroff broke the tension with a short but stellar set that began with gorgeous vocal harmonies on "Watch Me Fall" before sliding into an Uncle Tupelo-friendly take on "I Wanna Be Your Dog." More polished than the Stooges' original and the UT cover, the song didn't lack the raw sexuality of its predecessors. Mo Egeston's understated, slinky keyboards added a smidge of funk, making the song theirs.

The brothers and company took a break from their instruments to open the Carter Family's "No Depression" a cappella, and motioned for the audience to join them in song. For the first time all night, the sold-out crowd quieted, then joined the band in what morphed into a spiritual ceremony of voices, anchored with the organ and stomps of a country church. Leaving a world of toil and trouble for a place of light and joy, be it heaven or a music venue where a seminal local band played twenty years ago ... the Brothers Lazaroff escorted the crowd to that place where music brings people together and leaves them slack-jawed and emotionally spent.

A hard act to follow, indeed, which wasn't helped by some equipment troubles. But Grace Basement pulled it off, ending the run of bands with an extended blaze of "Effigy." Full of trembling whammy bar, haunting vocals, and a roaring intensity that shattered the dirge-like quiet of the original. And yet, despite the song's horror and sorrow, the audience and the band were all grinning. Sated and happy in the nostalgia of songs rooted in local history, and the glow of knowing, twenty years later, that the the fire lives in the music of modern torch-bearers.

But the show didn't end there. It wasn't over until Fred Friction, one of Uncle Tupelo's biggest proponents, took to the stage dressed in two Stag Beer shirts. With electric guitar in hand, Friction unleashed a ten-minute performance of the band's rare live relic, "I Drink Stag." A blast of noise, the song contained the lyrics, "I drink Stag" over and over. Friction added a few missives about the shortcomings of other beers. Sadly, he'd had a few too many Stags and ended the night by tripping through a collection of discarded beer bottles and falling off the stage.

Uncle Tupelo had the right idea - it's good to quit while you're ahead.