The cultural importance of records extends beyond the music within their grooves. Generation after generation has defined itself by its vinyl aesthetic. From Elvis Presley to The Beatles, The Sex Pistols to Madonna, the album cover has become a cultural landmark that encapsulates a unique moment in time, even up into the digital age. On a recommendation from previous collector Coreyography, we met up with V-Vegaz hairstylist and record collector Helen Petty and her five-year-old son, Tegan, to discuss vinyl's lasting stylistic importance and rock & roll haircuts.

As for current pop stars, is there a person with a really distinctive hairstyle? Hmm... Rihanna.

Do you ever get requests for a "Rihanna"? We do. We get that, and we had a girl come in the other day and get the Karen O from the Yeah Yeah Yeahs. The bowl cut. That was pretty awesome. That's a little bit more modern. 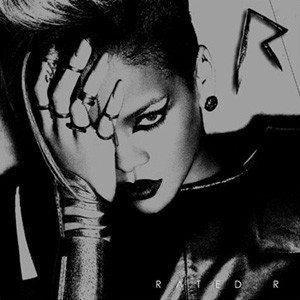 That's even kind of similar to "The Slade"! In cutting hair, have you ever had someone bring in an actual album and ask for a haircut off of the cover? I had a client of mine bring an album in. He was just down at Vintage and bought it. I think it was Joy Division. It was just one time.

Do you think albums played a major part in differentiating iconic fashion and style, or is that something that is just inherent to pop music? That's kind of a which came first: The chicken or the egg? I would have to say, yeah. Definitely in the '80s, Madonna, Pat Benatar, those kind of looks on their album covers got emulated thousands over by crazy, screaming girls. (Laughs)

Is there a difference in the way we listen to music now and the way we define style now? Now everyone has a computer. Instead of seeing the artist on the cover wearing whatever they're wearing, people go online to gossip websites for the more popular artist, or last.fm or Pandora with the photos of the artist and see it that way. Although, it's definitely less intentional.

A band like The Beatles was so defined by their haircuts. You lived through their albums through their haircuts. Like, "Oh, they have mop tops. Now their hair is longer. Now they have mustaches." The Beatles transition was spread out over a course of years and you mainly only saw it on album covers. Could that ever happen again in pop music, or is it too instantaneous now? I think it can, but it's more fleeting. If someone were to come in and say, "You know that haircut that Lady Gaga or Rihanna had?" I'd be like, "When?" You can't really say from the second album, like with the Beatles. I guess it's possible, but they'd have to bring in a photo. So I guess it's definitely not connected to their music or album art anymore. Like everything else, it just comes and goes. There is not as much staying power with artist and their image.

How did you first get into music? I was in seventh grade and moved here from California and started middle school here, which is a rough time for anyone. (Laughs) Especially when you are coming into a group of friends that went to school together for a long time. I met a couple kids who had a band, Detox, a punk rock band. I became friends with them and started going to their practices.

I think the first band that I heard that I connected with was The Descendants. It was all over from there. My identity growing up was going to shows, traveling to go to different fests and buying records.

What was the first album you ever bought? Cyndi Lauper She's So Unusual on vinyl.

Do you have a favorite album of all time? That's too hard because I have favorite albums from when I was a teenager because it's associated with that time. But I don't know if I would say it's my favorite.

What's your favorite album from when you where a teenager? Jawbreaker 24 Hour Revenge Therapy.

With a five-year-old son, how often do you still get to listen to records? Everyday! Oh yeah. He loves it. We have dance parties.

Is there any sort of ritual that goes into listening to records instead of just turning on an iPod? I think especially for a little person, it's so much fun because he can't read. So scrolling through an iPod it's going to be whatever I choose. There is no connection, but I can say, "Go pick out an album," and it's like a little book. He can open it up and there are things in it. There are pictures and whatever else they shoved in there. It's tactile.

Do you think when Tegan is in his twenties that he will be able to got back and reflect on his childhood with iTunes the same way you were able to with records? It's depressing. You lose something in the translation. When you are sitting in your home and you are not going out into the world to find this thing, or just randomly stopping into a store when you are out of town and finding this thing, it's all just very intentional. "Oh, I read about this band so I'm going to sit in front of the computer at my house and order it off of iTunes." I think it's sad that there is going to be that disconnect from memories. It's like a love letter. No one wants a love letter in an email. It's nice, but what do you do -- print it out? You want something in someone's handwriting that is unique. It's kind of the same thing. Even though they pressed thousands of records, it's special. Not just anybody could have it or does have it. They need to go find it.