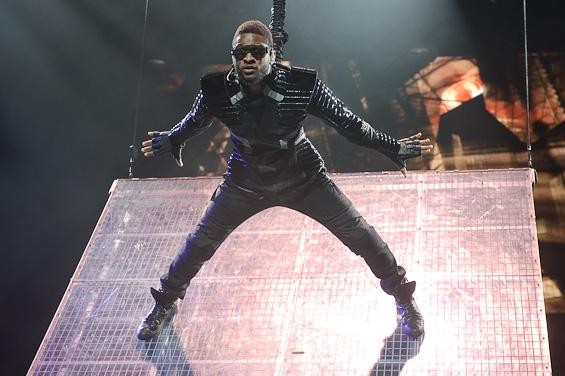 The St. Louis stop on Usher's OMG Tour began with the magician's best trick: misdirection. While a troupe of hip-hop Cylons danced amid a vaguely dystopian stage set, Usher himself was levitated on a floating riser near the rear of the floor, coasting above the crowd as he sang this year's Raymond v. Raymond opening cut, "Monstar." Once the riser descended onto the stage, the still-harnessed Usher engaged in some Spider-Man-style acrobatics, using the now-vertical platform as a climbing wall, a rooftop and a giant slide. That style of showmanship carried through the 100-minute performance, as Usher and his nine-person dance crew worked their way through his catalog of dance-club bangers, tender ballads and sweaty slow jams.

For the first part of the set, the choreography was as important as the music. Usher doffed his black leather jacket to reveal a tight leather breastplate during "She Don't Know," which matched the female dancers' bondage bikinis; it would be the first of many undressings. "Yeah!" is still his biggest and most recognizable hit, and it came early in the set and featured some of the set's strongest group choreography. Usher himself remains no slouch on the dance floor: In a tribute to his idol and most obvious influence, Michael Jackson, he put on a pair of sparkly high-tops and moonwalked around an elevated platform before launching into a smoothed-out "U Make Me Wanna." 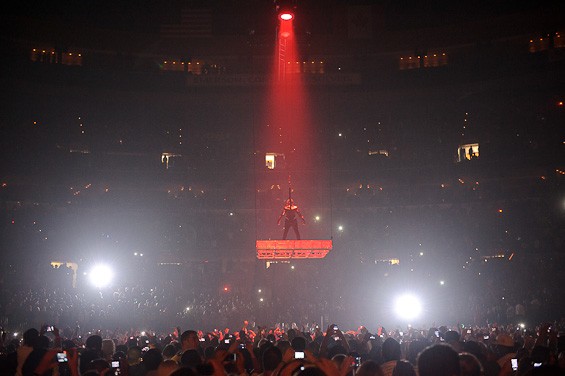 When he wasn't singing, dancing, or engaging in some playful striptease, Usher used his considerable charm and magnet-like hold on the females in the audience to engage in some large-scale flirting. As he played up his status as a newly single man, Usher asked the ladies to come to the foot of the stage so he could make his selection for the night. Sure enough, one lucky lady named Janelle was brought on stage during "Trading Places," and the pair engaged in a little good-natured dry humping while Janelle tried desperately to keep her top from falling down. Her moves and her flexibility were so good that she seemed to be an extra pre-chosen for this routine, but Usher's shit-eating grin during a particularly righteous bump-and-grind session proved that he was as surprised as the crowd was at the local talent.

If the show's sex-vibe wasn't already at a fever pitch, "Love in this Club" put it over the top. The song is the best amalgamation of his talents: It's a one-on-one seduction that is both entirely carnal and undeniably sweet, and features a stone-cold groove that lifts off at the hands-in-the-air chorus.

Both Usher and the audience needed to towel off after such a hot song, and the performer wisely trotted out a few songs that displayed his considerable vocal chops without the distraction of dancers or busy stage plots. "There Goes My Baby" found the stage coated in celestial fog and heavenly rays of light, and the simple set-up brought the focus to what would be his best vocal performance of the night. Usher ascended to his floating platform once again for "Burn," but even his high-flying stature kept the focus on the song.

After a brief DJ-led medley of some of Usher's earliest hits, the night ended with his two biggest hits of 2010. The stage was set to day-glo neons for "DJ Got Us Fallin' in Love," his most Euro-worthy dance track. After a brief encore, Usher and crew ended the night on a high note with "OMG," which is far better in concert, stripped of will.i.am's AutoTuned distractions. Judging from the crowd's continued enthusiasm throughout the show, it seemed that Usher could have put forth much less effort to win over an adoring audience. But like a true showman, Usher rarely, if ever, phoned in a dance step, a vocal trick or a flirty smile.

Rising star Trey Songz warmed the stage for Usher with a well-received set of R&B, much in the style of the night's headliner. A cover of Kings of Leon's "Use Somebody" came early in the set, though his one-two punch of "Neighbors Know My Name" and a hard-edged "Bottoms Up" closed the opening slot on a high note.