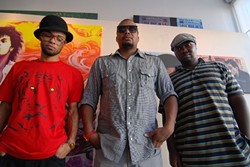 You've probably already heard about the awesome awesomeness that is and will be Fresh Paint II this Friday at 2720 Cherokee. The event's Facebook page already has more than 15,000 (!) invites.

But, if you aren't already in the know, here's the deal: Local indie rock darlings So Many Dynamos are collaborating with Hawthorne Headhunters (featuring the incomparable Black Spade) and hip-hoppers Illphonics for a very cool musical experiment.

The bands, according to event co-organizer Kaveh Razani, will each play three or four song mini-sets. Then they'll take turns on stage, playing songs that riff off of whatever came before. At the end of the night Headhunters, who are dropping a new album soon, will play a longer set all their own.

As if that's not enough, the Art Dimensions Gallery above the venue is hosting an exhibition of commerce-themed multimedia art in honor of Black Friday.
Here's the full roster of artists via the venue's website:

So forget the mall on Friday, spend your money on local music and art.