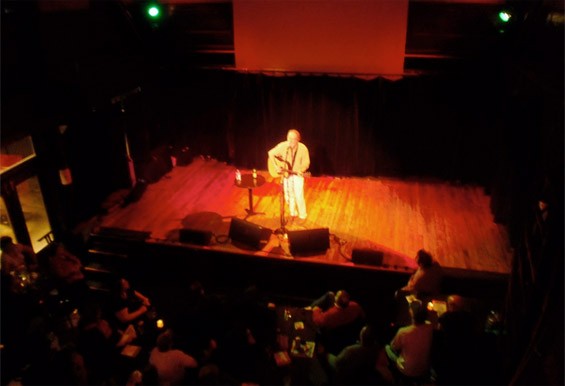 A Loudon Wainwright III gig is a performance but not a show. He stands on the stage alone, with a big Martin D-28 acoustic guitar, a small table with scattered cheat sheets and a bottle of water. He barely even dresses the folksinger part. With rumpled Dockers slacks, a button-down shirt and Pete Seeger's beard, he looks like he'd rather be home reading a novel or watching CNN and killing the blues with a $15 bottle of wine.

But then he sings, and his Martin rings out, and he reminds you that he's some kind of national treasure.

On a stormy Monday night at the Old Rock House, his fans are as grizzled as the man they've come to see. He doesn't play St. Louis often. The last time, according to one zealous audience member, was years ago at the Duck Room. "The Death Room?" Loudon asks with perfect Freudian misprision. "I just remember it was a bar." Last night he could have been playing anywhere - a street corner, a living room, an Orpheum - and he would have done just what he's been doing for over 40 years. He's finding out how much a good song can do.

Local openers Spectator began with a short set of moody folk rock and half-wordless vocal exercises. Spread out across the stage - acoustic bass, violin, electric guitar and keys - they raised stage presence to a whole new level of absence. The sound was pretty, the singer at times as pleasant as a drowsy Norah Jones, but tempo was rather vague if present at all.

At just after 9 p.m., Wainwright walked through the crowd and to the microphone, and rolled up his sleeve. "I just want to shoot a little dope and we'll start," he said. Our greatest living satirical songwriter began with two seasonal songs, "Suddenly It's Christmas" and "Thanksgiving," the latter more withering than the former. Holidays at the Wainwright house are a pitiless Oedipal comedy. Actually, every day is a reckoning with the primal scenes he remembers or, as a famous musical father, has authored. On stage, he sings his guts out, his voice clear and muscular with effortless vibrato, his tongue wagging with joy. His songs and stories become Woody Allen monologues with punch lines that can rip your heart out. Though two of the newest songs he performed -- a revision of the Everly Brothers' "Bird Dog" with a litany of recent liberal political calamities (commissioned by The Economist magazine no less) and a tune about the absurdity of growing older on medication - nailed his gift for topical humor, Wainwright is, finally, so much more than a comic genius.

Mid-set songs "Half Fist" (about his grandfather, the first Loudon), the newish "Dead Man's Clothes" (about rummaging through his departed father's closet), "White Winos" (about getting drunk with mom), and the final two songs of the night, "School Days" (the first song he wrote for his first album) and "Middle of the Night" (a darkly hopeful tune from the 2010 album 10 Songs for the New Depression), illustrated just how many hard and personal truths, just how many finely rhymed and melodic songs, can come from merciless, honest, self-analysis. Few songwriters cut as deeply and shrewdly as Wainwright at his best. And even without some of his most famous songs - no "Dead Skunk" or "The Man Who Couldn't Cry" - last night's set showed the old folksinger at his most effortless, wide-ranging best.