Let's be honest: Wolf Parade's latest album, Expo 86, doesn't quite pack the punch of its predecessors, Apologies to the Queen Mary and At Mount Zoomer. It has all the ingredients of the band's recipe for sonic success: Spencer Krug's weird, wailing poetry and cascading keybords; Dan Boeckner's jittery guitar licks and striking refrains; and that sprawling, artsy brand of Canadian prog rock that makes you want to pump a fist in the air and belt out the chorus whether you're riding in the car or rocking out at a concert.

Still, something is missing on Expo. Until last night's show, it was hard to put a finger on what, exactly, that something is. But, after a frenetic, sixteen-song set which mixed material from all three Wolf Parade LPs, the answer is clear. The recorded songs don't quite have the intensity and, more essentially, the urgency they have when performed live.

That's really a backhanded way of saying that the band's new material easily held its own against the old stuff and Wolf Parade absolutely fucking owned at the Pageant last night.

While Krug bawled out the bizarre opening verse to Expo's first track, "Cloud Shadow on the Mountain" -- "I was asleep in a hammock/ I was dreaming that I was a web/ I was a dream-catcher/ Hanging in the window of a minivan/ Parked by the water's edge/ I would say that I was all alone" -- Boeckner backed him up with a few searing notes on the guitar and the band hit full stride at a pace two or three times faster than the recorded version. The band then sustains that intensity for five-plus minutes -- and that's vintage Wolf Parade.

Toward the end of "Cloud Shadow," which came midway through the set, Boeckner and bassist/guitarist/keyboardist/jack-of-all-instruments Dante DeCaro traded guitar riffs and improvised a booming, ear drum-bursting crescendo. It was so badass that, when Wolf Parade followed the song up with "This Heart's On Fire," one of the strongest tracks on its first record, it almost felt like the band was taking it down a notch. 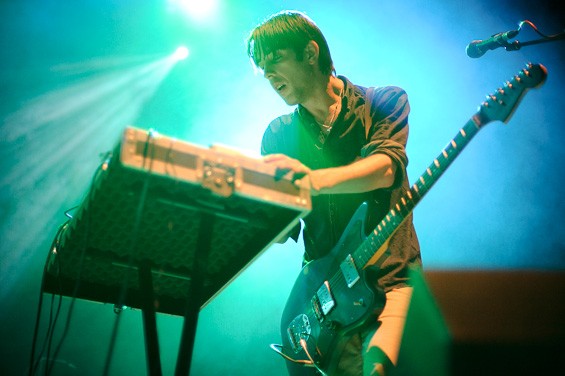 Well, almost. Boeckner emanates intensity when he performs especially on simple songs such as "This Heart's on Fire." He builds and builds with the repetition of a few simple lines until he's screaming at the top of his lungs with a vein bulging out of his neck. He's wire thin and wears his guitar slug low and when he's really feeling it he spasms and twitches and spins in little circles.

Krug, on the other hand, hunches over his collection of keyboards and synthesizers. His mop-top hair hides his face and, occasionally, he headbangs like an '80s hair metal star. The little stool on which he perches himself gets knocked over more than a ghetto mini-mart. He's at his best on songs that aren't too dense lyrically, such as "You Are a Runner and I Am My Father's Son," where he can really draw out the syllables on each word and make the most of his haunting, almost menacing voice. "Runner" was the fourth song of the night -- coming on the heels of a booming version of Expo's "Palm Road" -- and, as Krug yelped and kicked the shit out of his stool, Boeckner finished off the song with a simple, grinding, feedback-drenched solo.

The band kept banter to a minimum. Krug joked that they all had colds that they were treating with whiskey and, Boeckner added, "various over-the-counter cocktails." As Wolf Parade came out for the encore, Boeckner recalled a gig five years ago at the Rocket Bar, which he described as, "literally the worst show ever...no one was there." Then he acknowledged the crowd at the Pageant -- a modest turnout, with the balcony closed -- and Krug noted that the next song was an old one that it almost certainly played that night. Wolf Parade launched into "Shine A Light" and this time around the St. Louis audience sang along to damn near every word.

The final song was a prolonged take on "Kissing the Beehive." The album version clocks in at well over ten minutes and the live version was at least that, with frenzied improvisation and multi-instrument jamming (Boeckner on synths and guitar, DeCaro on bass, guitar and synths) that was impressive just for the sustained ferocity of the sound. It's that quality that -- no matter what Wolf Parade record you prefer -- simply can't be captured in a recording studio.

Critic's Notebook: Opening band Ogre You Asshole was really, really awesome. It's four Japanese dudes who sound like a combination of Explosions in the Sky and Franz Ferdinand...only they sing in Japanese. Never heard them before last night, but will definitely be checking out their album. Suggest you do the same.