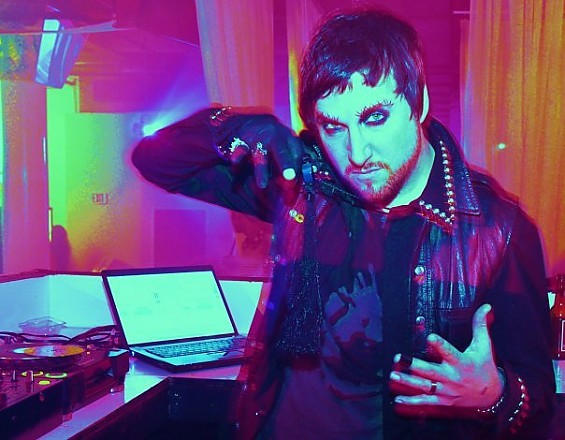 Dvdn Alterior introduced rave culture to St. Louis in the early '90s, and since then, he's been producing envelope-pushing parties that have left an indelible mark on the St. Louis scene.

Alterior -- who prefers to go by the moniker "Dvdn" -- and his now defunct band My Other Self, which included longtime friend DJ Lance Rock of Yo Gabba Gabba, opened for Nine Inch Nails on its inaugural visit to St. Louis. Dvdn was also the co-conspirator/creator of Superstars of Love, which was something of a DJ supergroup and freakshow that began in St. Louis but attracted a measure of national attention among those who, ahem, love to party. Some of their notable appearances include the infamous LoveParade in Germany, Drop Bass Network anniversary party in Milwaukee, the annual Miami Winter Music Conference and Electroclash Festival in NYC.

After building a name producing raves and making St. Louis a destination for electronic music, and well, hard partying, by the end of the nineties, he was working with Contemporary Productions. Dvdn was instrumental in expanding the audience in St. Louis for big name electronic artists and DJs; he brought Paul Oakenfold for his first set in St. Louis in 2004, as well as big-name acts like The Chemical Brothers and Moby, before leaving town for greener pastures.

He moved back to St. Louis about a year ago.

"I have good memories of that whole scene; I got to travel all over. Now I'm just doing my own thing, throwing theme parties and DJing with bands and DJing fetish parties," he says. "It's kind of a different scene than a bunch of rave kids."

Today, Dvdn runs the website savoirnoir, and his right hand man/bodyguard Zeus, along with Ashleigh Diabolic aka Paris Hitler, Dick Jones and Jason Sonique, (who still DJs with Dvdn on occasion) are the last remaining Superstars of Love in St. Louis. DVDN travels out of town often, getting the hook-up at different festivals through DJ Lance Rock, who despite his Yo Gabba Gabba stardom (or maybe because of it?) has become a festival mainstay. Dvdn continues to travel for DJ gigs, a few weeks ago he was in Chicago, Djing with former Superstar turned fashion designer Ryan Paradise and Greg Corner of Kill Hannah at the Debonair Social Club in Wicker Park.

"When we got booked to DJ in like, New Orleans, I would rent a fifteen-passenger van, I'd throw all my crazy friends, girls and people and costumes and props in this van and we'd dress up crazy and go into a party and just take it over. We had people wearing costumes and performing crazy lewd acts and just being crazy. We were always doing these little scenes and little stunts we would perform while we played music."

He describes Superstars of Love as a sort of cult, which made him the benevolent, party-happy Jim Jones of the scene. He even got a doctorate of divinity, he says, and started going by Reverend Dr. Dvdn to cement his personal lore, which was already somewhat mythic. "People said that I was cult leader. That was back in the days when I had a five-bedroom rave cave in the Central West End, people had all these crazy stories about me...I've always been a controversial figure. I push a lot of buttons, but I'm just putting myself out there."

"We created these experiences; I still get Facebook messages from people that are like, 'So glad you guys are still here! Your parties changed me, they're some of the most memorable experiences I've ever had in my life.' That's the message that I get a lot from people. Now I think the parties are just parties, but back in the day they were like, life-changing experiences for people. It means a lot to me to hear stuff like that."

Unlike most of the people who populate St. Louis nightclubs today, Dvdn remembers when the underground was sacred, and when getting a crowd to turn up at an abandoned warehouse was a task -- and not an easy one. "Everything was underground, you had to call an info line and pass out fliers," he says. "Back then we had to be on the front lines, fighting for our right to party. Now with the Internet it's totally different. There were more underground parties where people of all walks of life would come together and dance. Now it's more segmented. It's very cliquey."

Since moving back to St. Louis in 2009 after stints in San Francisco, Chicago and New York, Dvdn has been throwing parties monthly at various venues around town, most notably the Hump series of theme parties at Halo Bar, as well as hard-to-forget one-offs like the Midsummer Night's Cream whipped cream party at the Crack Fox over the summer, and the White Flag Tighty Whitey party in 2008. He's recently started a weekly residency at The Crack Fox, called Smash Wednesdays (you can find him there tonight). The crowd at a recent Smash Wednesday was pretty thin, but $10 all-you-can-drink is undoubtedly one of the better drink deals in town.

Dvdn has fond memories of the events Superstars of Love put on over the years, but says that the past is in the past. Raves lost their appeal for Dvdn after the scene caught some heat and were forced to move from nameless warehouses to liquor licensed and legal venues like clubs and skate rinks. He's since evolved out of that world, and doesn't necessarily approve of how young ravers are these days. "I find that whole scene to be quite irrelevant at this point," Dvdn says. "It's the scene I came up from and kind of started in St. Louis a long time ago. I mean, it took me around the world and back. It's kind of a legacy at this point. Now I'm just doing my own thing."