Update, Wednesday, December 1, 10:30 a.m.: Click here to read our latest follow-up, which takes a look at how state troopers have arrested more than 2,000 people at checkpoints near Camp Zoe.

(Original post below.)
One day after A to Z broke the news that federal law enforcement agencies and the Missouri State Highway Patrol are attempting to seize Camp Zoe, a 350-acre campground in central Missouri that hosts the Schwagstock music festivals, the attorney for the property owner is defending his client -- and criticizing the asset forfeiture process being used by the government.

In a complaint filed earlier this week, the U.S. Attorney's office alleges that Schwagstock gatherings have been the site of widespread drug use and sales, and that property owner Jimmy Tebeau and his staff "took no immediate action to prevent the activity."

"It's a terrible thing to think that the government could just march in and take someone's money, take someone's property," says Dan Viets, the Columbia attorney representing Tebeau. "We haven't seen a bit of evidence to back up their claims. They can't blame the property owner just because some people who are present break the law any more than they can blame the city because crimes take place in city parks. That obviously would be fundamentally unfair." 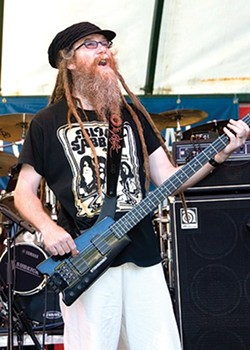 Viets, who is also the coordinator of Missouri NORML and a trustee for the ACLU of Eastern Missouri, says that the government isn't just seizing Tebeau's land. They also raided his personal bank account.

"They took all of his money from his bank account," Viets says. "Whether they get to keep it is another matter, but they seized it. It is incredible what the federal government can do to people or a business based merely on allegations with no evidence whatsoever. When they take all your money its pretty hard to hire a lawyer. They know that, and they're depriving a citizen or a business owner of his right to counsel."

As Viets notes, the legal process has only just begun. Until a judge rules otherwise, Tebeau still controls the land, which is also the site of his private residence.

"The property is still in Jimmy's hands," Viets says. "The property hasn't been taken; it's just the threat of forfeiture. It's like suing somebody and asking for a million dollars. You don't have to hand over that million dollars until the judge says so."

Unfortunately for Viets and Tebeau, experts in civil forfeiture cases say they face an uphill battle to prove their innocence. And yes, the way federal laws are structured, the burden of proof is actually their problem, not the feds.

"These laws are designed to be complex and very complicated," says Eapen Thampy, co-founder of the non-profit group Americans For Forfeiture Reform. "There's lots and ins of outs, but the long and short of it is they're designed to hinder people from defending themselves and to take their property."

Unlike in criminal cases, where prosecutors have to prove guilt "beyond a reasonable doubt," federal forfeiture proceedings only require the government to show "a preponderance of evidence" that someone's property was knowingly used to commit a crime, Thampy says.  Making matters even more difficult is the fact that hearsay evidence -- for example, a federal agent testifies that a paid informant told him that a car or home was used in a drug transaction -- can be used to justify forfeiture, even though it would likely be inadmissible in a criminal case.

Missouri state law requires that property owners in forfeiture cases be convicted of a felony crime before their property can be seized -- but federal law has no such standard. Tebeau himself has not been charged with a crime, but Thampy says if the Camp Zoe owner admits to any wrongdoing as he attempts to save his property, he could leave himself open to prosecution.

"[In forfeiture cases] you don't have the Fifth amendment right to not incriminate yourself," Thampy says. "They can essentially force him to testify against himself in civil case and then use that testimony against him later in a court of law."

As this thoroughly researched article from Reason.com explains, the asset forfeiture process is relatively new to America:


Federal asset forfeiture law dates back to the Racketeer Influenced and Corrupt Organizations (RICO) Act of 1970, a law aimed at seizing profits earned by organized crime. In 1978 Congress broadened RICO to include drug violations. But it was the Comprehensive Crime Control Act of 1984 that made forfeiture the lucrative, widely used law enforcement tool it is today...

...According to a 1992 Cato Institute study examining the early results of the Comprehensive Crime Control Act, total federal forfeiture revenues increased by 1,500 percent between 1985 and 1991. The Justice Department's forfeiture fund (which doesn't include forfeitures from customs agents) jumped from $27 million in 1985 to $644 million in 1991; by 1996 it crossed the $1 billion line, and as of 2008 assets had increased to $3.1 billion. According to the government's own data, less than 20 percent of federal seizures involved property whose owners were ever prosecuted.

Even more remarkable is how Missouri courts have allowed local law enforcement to handle forfeiture cases. Again from Reason.com:


In Missouri, for example, forfeited property is supposed to go to the state's public schools. But in 1999 a series of reports in The Kansas City Star showed how Missouri police agencies were circumventing state law. After seizing property, local police departments would turn it over to the DEA or another federal agency. Under federal law, the federal agency can keep 20 percent or more of the money; the rest, up to 80 percent, goes back to the local police department that conducted the investigation. None of the money in these cases goes to the schools.

That, Thampy tells Daily RFT, is precisely what's going on in the Camp Zoe case.

"When a state law enforcement agency like the Highway Patrol is involved, they have jurisdictional control," he says. "That's why they handed it over the DEA and took it federal. They're trying to dodge state law. The Highway Patrol sends the forfeiture to the DEA and the Department of Justice, who will eventually cut them a check for 80 percent of whatever the property is worth. That way the schools never get any money."

Asked about Thampy's take on the federal forfeiture process, Viets replies, "We'd prefer if it was state case. The Missouri forfeiture laws are far more respectful of due process."