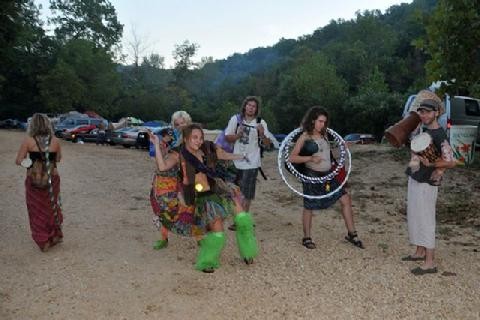 Update, Wednesday, December 1, 10:30 a.m.: Click here to read our latest follow-up, which takes a look at how state troopers have arrested more than 2,000 people at checkpoints near Camp Zoe.

The DEA, Missouri State Highway Patrol and U.S. Attorney's Office are trying to seize Camp Zoe, a 350-acre campground in central Missouri that hosts the music gathering Schwagstock -- after a four-year-long investigation allegedly uncovered rampant drug use and sales on the property.

According to a complaint filed November 8 in Eastern Missouri District Court, "over the past several years law enforcement agents have specifically observed the open sales of cocaine, marijuana, LSD (acid), ecstasy, psilocybin mushrooms, opium and marijuana-laced food products by individuals attending the music festival and made multiple undercover purchases of illegal drugs."

The paperwork shows that the authorities hope to use a mechanism called asset forfeiture to take the property. Under a forfeiture, they would not need to convict the property's owners of a crime -- or even charge them with one. The burden of proof is much lower.

The Camp Zoe property is located about 150 miles southwest of St. Louis near the town of Salem. It is owned and operated by Jimmy Tebeau, a member of the local Grateful Dead tribute band The Schwag. The complaint alleges that Tebeau -- who has not been charged with a crime -- and other Camp Zoe staff members were "in the immediate area" when the drug deals went down and "took no immediate action to prevent the activity."

Tebeau has not returned calls seeking comment on the government's claims. Joe Grasso, the booking agent for The Schwag, declined to comment. Grasso says his contract expired and he is no longer the band's booking agent.

According to the Camp Zoe website, Tebeau purchased the land, took up residence there, and started hosting the Schwagstock festivals in spring of 2004. The camp has also been the site of the Pagan Spirit Gathering, the Bluegrass Jam, Biker rallies and Gateway Burners, a gathering similar to Burning Man.

Schwagstock 45 was held earlier this year on September 17 and 18. The complaint reveals that "undercover purchases have been made as recently as September, 2010" but also says the investigation stretches all the way back to 2006 and includes evidence from "surveillance, undercover operations, source information, bank records, and interviews."

Asset forfeiture, according to the Department of Justice website, "enhances public safety and security," by "removing the proceeds of crime and other assets relied upon by criminals and their associates to perpetuate their criminal activity against our society."

In other words, if someone's car, home, or other assets are used to commit a crime, the DEA and other law enforcement agencies have the power to confiscate that property. They can then auction those items off and use the proceeds to fund their budgets. The complaint filed earlier this week says the Camp Zoe property has an approximate value of $600,000.

Since Tebeau himself has not been charged with a crime, the Camp Zoe case falls under the category of "civil forfeiture." That means the before the court issues a "certificate of forfeiture" to make things official, the government has to show a "preponderance of evidence" that the property was part of criminal activity.

In Tebeau's case, the U.S. Attorney's office alleges that Camp Zoe was "knowingly opened, rented, leased, used, or maintained for the purpose of manufacturing, distributing or using controlled substances."

We will have much more on this story as it develops, so check Daily RFT for updates.
Camp Zoe Complaint