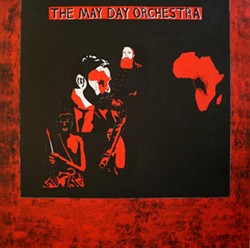 Tonight in the Ballroom at the Sheldon, the May Day Orchestra is releasing its new album, Ota Benga. The second "folk opera" in its catalog, Benga is about a "pygmy who was taken from the Belgian colony in the Congo in the early 1900s and brought to the World's Fair in Saint Louis. The songs tell the story of the Congo and follow Ota Benga's journey to a strange new home in the United States." Theodore and the Rats & People Motion Picture Orchestra will open; the latter is performing the score to a Swedish film called Haxan, a performance it will reprise as part of SLIFF on November 19. MDO features Tim Rakel and members of Tenement Ruth, along with a ragtag cast of multi-instrumentalists. The band funded Benga via a Kickstarter campaign, and earned enough money to release it on double vinyl. Doors are at 7, show's at 8 and tickets are just $12.