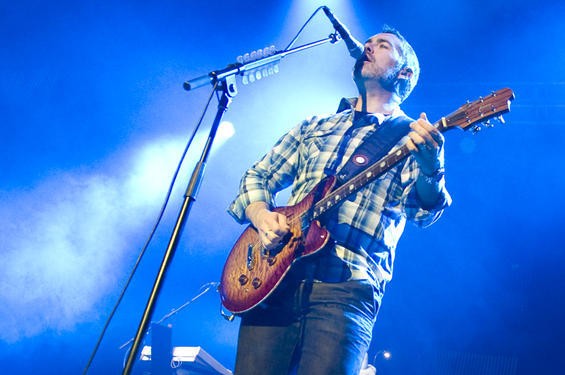 Because we know you are wondering, we're going to get this out of the way first: Yes, it is strange to think of the Barenaked Ladies without Steven Page.

Dude wasn't just one of the co-founders of the band. He wrote, or cowrote, just about all its hits up until "One Week" (which is the moment BNL hit truly big, and therefore the moment that some self-professed "true fans" expressed the opinion that surely the band had jumped the shark). Page sung lead vocals on nine of the eleven songs on the band's live compilation, Rock Spectacle. Really, up until his coke bust in 2009 and subsequent departure from the band, Page seemed like the band's face -- meaning the Barenaked Ladies without Steven Page is kind of like Aerosmith without Steven Tyler. Or Journey without Steve Perry.

And yet, were you in attendance at the band's sold-out show at the Pageant last night, you could have, possibly, not even missed him.

View a slideshow of photos from Barenaked Ladies at the Pageant

For one thing, all the guys in the band kind of sound like each other, with Canadian accents and slightly whiny vocal tones. It's genuinely hard to tell who sang lead vocals on which hit from the Page era, even if you're paying attention.

For another: about those manic raps ("chickity china/the chinese chicken/have a drumstick and your brain stops ticking") that casual fans might have assumed, based on appearances, were from Page. Turns out those were actually penned, and rattled off, by Page's co-founder, Ed Robertson. And Robertson is not only still with the band, but he looks (and sounds) better than ever.

Fact is, even if the band's latest release, All in Good Time, suffers from Page's absence as a song writer, the live show really doesn't suffer a bit. These guys have enough standards that they can skip some of Page's most beautifully personal lyrics ("Jane," "Call and Answer") and still have plenty of great material.

And they work wonderfully together.

With his leading man looks and quick patter, Robertson had the crowd eating out of his hand. (In the band's less-than-two-hour set, he managed to work in references to Ted Drewes' frozen custard, the St. Louis Walk of Fame, the Moonrise Hotel, the Arch and the Loop's own Booster Cafe -- and cobble a few of the above into a cleverly improvised rap.) Lovably hangdog Kevin Hearn handles the keyboard, the guitar, the accordion and the occasional lead vocal ("Another Heartache") with heartbreaking earnestness. And drummer Tyler Stewart and guitarist Jim Creeggan have a real Laurel-and-Hardy thing going on: Stewart is one of the most expressive -- and funny -- drummers you'll ever see, while Creeggan is capable of using his rangy body to immense comic effect.

The show definitely worked, even without Page. Initially, standards like "Who Needs Sleep" and "The Old Apartment" seemed somewhat rote, and half the audience on the floor sat stubbornly in their seat. (Seriously, guys, we know BNL fans are in their 30s and 40s, but not standing for the opener??)

Robertson's improvisations, however, quickly won the audience over. (Re: the Walk of Fame, he asked the audience, "Did you make that shit up? I can't believe that many incredibly iconic people are from St. Louis! It's ridiculous!") Everyone laughed and remembered the old BNL they used to love.

From there, it was on to the new stuff, which is normally time for a drink -- and yet no one got one. (Work tomorrow, don't you know?) Hearn wowed on the plaintive "Another Heartbreak" and also pulled off a great lead vocal on "The Sound of Your Voice," which the band actually sung a la the Andrews Sisters, grouped around an old-fashioned mike. An interlude back to BNL classics included "Brian Wilson," which only gets better with each listen, and may have been the night's best-received tune.

Of the new material, "Four Seconds" may well be the strongest song, with the goofiness of "One Week" coupled with a Zydeco riff. The audience didn't seem to get it, though they should have. No matter: From there, it was on to the big showstoppers, and damn if "If I Had $1,000,000" doesn't hold up.

Still, watching BNL is a bittersweet experience these days, through no fault of the band. If you were a white kid in college in the mid-'90s (or, by the looks of the crowd at the Pageant, if you parented a white kid in college in the mid-'90s), a surprising number of  Barenaked Ladies songs are on the soundtrack to your life. And when you hear Robertson talk about the fact that band made a children's album somewhere along the line -- seriously; it's called Snack Time-- or about the fact that he has a kid of his own, a kid he took to the City Museum, you suddenly start to feel old.

And when you think about it, these days, if you had a $1,000,000, you probably wouldn't even be rich. Not when you factor in taxes and the high cost of real estate and private school. It's nice to sing along, but after the show, the crowd cleared out quickly. This is an audience with jobs, and mortgages and mouths to feed -- probably much like the band it paid for a walk down memory lane.

Setlist (may have a few of the song names wrong -- anyone feel like helping out?)

Falling for the First Time

Blame It On Me

Sound of Your Voice

It's All Been Done

Too Little Too Late

Tonight is the Night I Fell Asleep at the Wheel