(A review of the opener, Mountain Man, is here.) 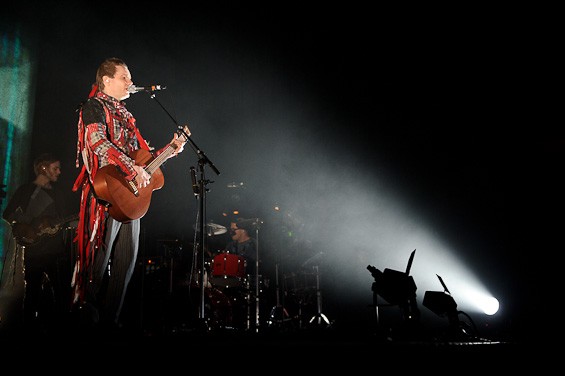 Catharsis. That's the first word that comes to mind after last night's Jónsi show at the Pageant. The Sigur Rós vocalist/frontman reimagined the songs from his solo debut, Go, in conjunction with a stunning light and video show. The combination was nothing short of jaw-dropping, a concert that was emotionally draining in all the right ways.

Wearing a red-and-gray plaid shirt draped with long fringe, Jónsi began the night on an acoustic guitar, playing the stripped-down "Stars in Still Water." Things picked up immediately with "Hengilás," which spiraled skyward on a bed of taffy-pulled organ, lightly bowed percussion, and Jónsi's forest-creature yelps and choirboy enunciation. The entire venue fell silent under the song's spell.

View a slideshow of Jonsi/Mountain Man at the Pageant

The tour's accompanying bells and whistles exacerbated the emotional heights. For "Hengilás," a translucent, Japanese-esque backdrop of woodland creatures and forestry images (and two smaller screens featuring butterflies at the foot of the stage) slowly disintegrated in cinematic flames of fire. Flickering sepia-toned footage of Jónsi and the band -- think decaying Super-8 film - appeared during "Icicle Sleeves." During "Animal Arithmetic," an army of chalk-like ants scurried across the screen. The light show was impeccable as well; the hues ranged from daybreak golden light to melancholy backlit spotlights.

On his solo work, Jonsi's vocal delivery is urgent and full of purpose; the languid, gauzy, wordless crooning found on his Sigur Rós singing isn't quite as emphasized. His four-piece backing band reinforced this last night. Drummer Thorvaldur Thór Thorvaldsson in particular was an asset: He attacked the kit with precise ferocity - and with such speed that the beats blurred together into slurring clatters -- but had the talent to use restraint as well. As "Icicle Sleeves" segued right into "Kolniður," he pounded out a throbbing, solitary bass-drum beat; a lone spotlight lit him up and faded immediately, in time to the rhythms of the funeral-like march. 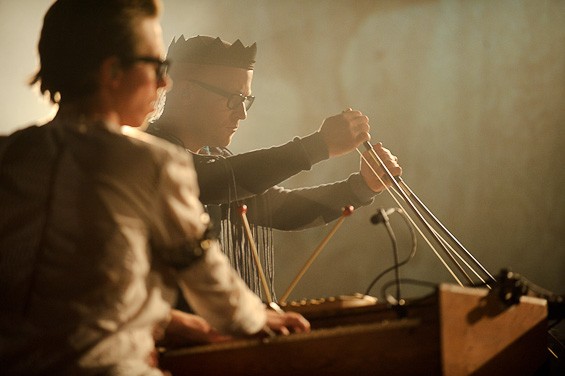 Jónsi mainly switched between acoustic guitar and piano, with the occasional detour into ukulele or percussion. His bandmates - especially keyboardist/pianist/percussionist Ólafur Björn Ólafsson -- added rich, evocative notes to this simple base. At several points, the group huddled around percussion instruments at the back of the stage to create shimmering, mystical textures. The antique music box twinkling in particular was full of sweet, childhood nostalgia.

That dynamic push-and-pull marked the show's sequencing, and the concert had the pacing and arc of a well-choreographed play. Peaks of rave-like noise, tempo and lights - the one-two punch of a galloping "Go Do" and heavy, drum-n-bass-influenced "Boy Lilikoi" - alternated with somber moments where Jónsi's singing soared and filled the venue. It's been said before, but his voice is an astounding, pristine instrument. He stirs up welling emotions no matter what he's singing -- perhaps because he's attuned to the primal frequency of the cycle of life, death and rebirth. Joy and sadness, happiness and melancholy, beauty and noise - the extremes co-exist in harmony within his voice.

For the encore, Jónsi added a feathered headdress to his jacket. The beat-driven noise hinted at during the main set came to fruition on "Grow Till Tall," which evolved from a soft-glow orchestral mourning into a ritualistic raindance. Jónsi doubled over and staggered around the stage -- a shadowy hunchback enveloped by blinding strobes, drums pounding like sheets of rain and deafening noise. The result was a realistic thunderstorm, nature's fury replicated on the Pageant's stage. What was left after the sensory overload ended was mental lightness, palpable relief and pure joy -- the sense that something very special had transpired.

Critic's Notebook: Kudos to most of the attendees at the Pageant, for being quiet and attentive. Seriously, it was so quiet you could hear a toilet flush in between songs. Probably the most respectful crowd I've seen at the venue in ages.

The crowd gave Jónsi and his band a standing ovation when they returned to take a bow at the end of the night. Haven't seen that in awhile, either.

The band bios for this current tour are painfully cute. Read 'em and smile:

The sonic extremes really stood out, but it's a testament to the talents of Jónsi and his band that they fit together. Last night, he ended the main set by kneeling on the stage digitally manipulating vocals so he sounded like a robot on the fritz. At the other end of the spectrum, he sang stark, a cappella lyrics to cap off "Tornado."