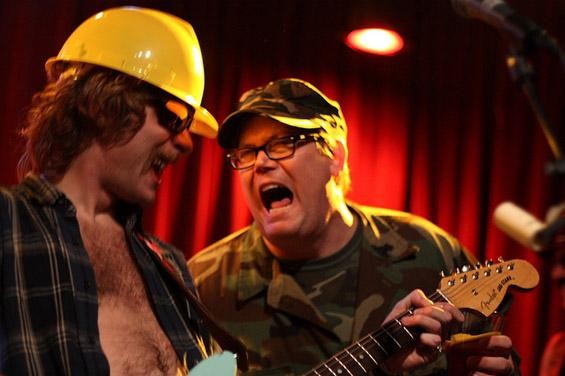 At first blush, a Band of Heathens and Deer Tick double bill at Off Broadway seemed a strange pairing. First blushes, however, are no match for good guitars, good songs and a damn good Halloween party.

The former is an expert band of Austin pickers and songwriters, in the mold of Little Feat or the Band, perhaps, or if you prefer a more modest reference, a younger successor to the Resentments, the legendary pickup-style band that's long held a weekly residency at the Saxon Pub in the heart of the Texas capitol. Its core audience is probably just a little older, a little more nouveaux-hippie, a little less punk than the reprobates who follow Deer Tick. But that band, for all its Replacementsy slop and twang (the group covered "Waitress in the Sky"), has more chops than the average indie-scruff rockers and a genuine sense of tradition, if by tradition we mean John Mellencamp and Chuck Berry (covers of "Authority Song" and "Maybellene," check and mate).

Band of Heathens opened just after 8 p.m., and despite the early start, the room was full a half hour later (it wouldn't sell out, however), with a motley audience of Cookie Monsters, slutty nurses, low-budget zombies and folks (like myself) too lazy to get into a get-up. The band, fronted by singers and songwriters Colin Brooks, Ed Jurdi and Gordy Quist, sounded tight in its harmonies and adventurous in its blues, with Jurdi singing all the wasted generation anthemry out of "LA County Blues" and the band, including a bass player who later confessed to having joined only "on Thursday," swung when it needed to and triple-guitar jammed even when it didn't. But with a dozen vintage guitars on stage, the Heathens weren't about to miss the chance to conjure the spirit of the Allmans. And more bands should be so savvy in choice of covers: Gillian Welch's "Look at Miss Ohio" and the Beatles' "I've Got a Feeling" sounded like they'd been written just for this band's moment.

In precisely appointed Village People attire, Deer Tick (and a couple of friends) took the stage to the karaoke of "Y.M.C.A.", a goofy, delightful entrance, and then jumped into an hour and a half of dirty, bluesy, bashing rock, with John McCauley's nasal twang sounding more sweet than metallic, and the whole band buzzed but not obliterated. The drunken chaos of a Deer Tick show is the essence of its appeal, but this night was just a little more focused than usual, skronking sax solos and skittish drumming aside. A hard, shuffling "These Old Shoes" from War Elephant and a gliding "Choir of Angels" from Black Dirt Sessions were highlights, as was a suite of covers, including John Prine's "Mexican Home," a funky take on the late Bobby Charles' "Down South in New Orleans" and a terrifically unironic "La Bamba." And "The Monster Mash," of course.

And then up came the thump of "Macho Man," dancers reassembled, pranced off stage and disco-lined through the crowd, who gathered round and shook their beer-sprayed bodies to the silly wonderfulness of it all. That dance-floor party would have been tough to follow, and Deer Tick wisely didn't try.

Check out more of Kate McDaniel's photos from the show at the KDHX Blog.