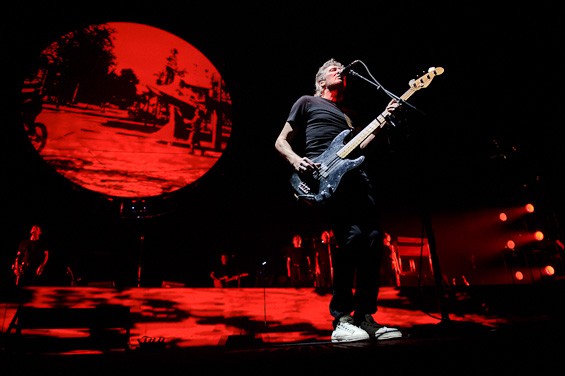 If you're a Pink Floyd fan, Roger Waters' The Wall Live tour is a big deal: It's the first time in twenty years that the entire iconic album has been played live by someone associated with the band. Even if you're not a Pink Floyd fan, the tour is a technical marvel worth experiencing, a show full of well-choreographed special effects and arena spectacle. Last night, an adoring crowd packed the Scottrade Center for the St. Louis stop of the tour. The night was thought-provoking and visually dazzling, although occasionally flawed.

Before the show started, a homeless-looking man pushing a stuffed shopping cart wandered through the crowd. He made his way to the front of the stage and threw a faint-pink ragdoll onstage - a symbolic representation of the album's character, Pink. Soldiers carrying red flags with the familiar crossed-hammers logo marched onto the stage. The platform on which they stood then lifted them high above the stage, fireworks exploded and Waters walked out. Silver-haired and sporting sunglasses, he shrugged on a black leather jacket with the same logo on its sleeve. Thus began "In the Flesh?" a song which ended with a dynamic explosion of pyrotechnics.

The rest of the Wall experience was sensory overload, in the best possible way. Surround-sound beamed incidental voices and instrumental effects around the arena; the enveloping disorientation was effective. Moody lights bathed Waters and the band in spooky reddish-black hues. Giant inflatables - a garish caricature of a British schoolteacher, a green-hued dragon-woman with orange spiky hair and, of course, a black pig floating above the crowd - nodded to Pink Floyd's arena traditions. A circular video screen in the back complemented the projections on the jagged, in-progress wall; notable animations included plants simulating sex and planes air-dropping dollar signs, a cross, the Star of David and the Shell Oil logo. (Being able to look up at the ceiling and see the giant Volkswagen "VW" logo on the arena's hidden Jumbotron felt rather fitting.

The wall itself was constructed methodically -- and with such pinpoint precision -- that each brick melted into part of the video screen immediately after being placed. By the end of part one, the stark white construction effectively blocked the band from the audience. During part two, the screen became a blank palette for impressive video projections -- everything from ghoulish animation and macabre sloganeering to nightmarish monsters and marching armies of crossed-hammers. Until "The Show Must Go On," most of the band stayed largely hidden - guitarist/ex-SNL musical director G.E. Smith peeked out from behind a brick to play guitar during the sufficiently creepy "Is There Anybody Out There?" and Waters settled in a mini-living room set-up with a chair, TV and lamp for "Nobody Home." 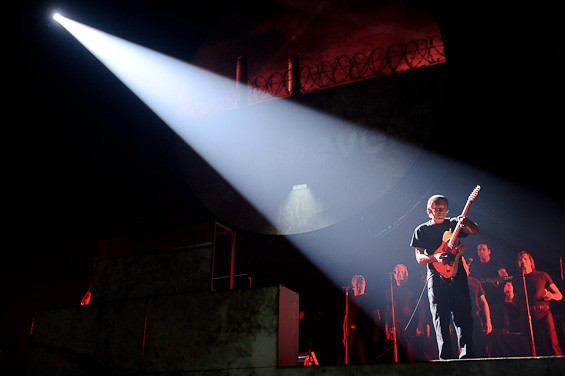 "Comfortably Numb" also soared - literally and figuratively: Vocalist Robbie Wyckoff and Kilminster took turns appearing high above the wall, peeking from behind it to perform David Gilmour's vocal and guitar parts. Wyckoff's vocal lead on "Run Like Hell" was also astounding. (His contributions, along with the rumbling, funk-disco rhythms and daybreak guitar melodies, arguably made it the show's highlight.) Waters' voice - which had striking similarities to David Bowie's alien '70s years - expressed appropriate vulnerability on "One Of My Turns" and "Goodbye Cruel World." 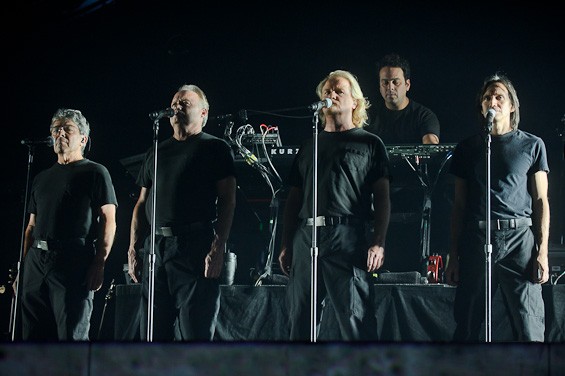 Fans and critics have spent years analyzing the album's many thematic and allegorical layers, including (but not limited to) the concept of Big Brother and how the Neo-Nazi imagery and fascist nods relate to the Hitler's rise of power in Nazi Germany. On this tour, Waters chose to expand the Wall's thematic ideas to include more anti-war commentary. Photos and bios of those who have died because of wars (a group that includes Waters' own father) appeared on video during "The Thin Ice" and intermission, and moving footage of children being surprised by returning soldier parents underscored the message of "Bring the Boys Back Home." This modernized the show and turned its resonance outward -- after all, the youthful isolation and anti-authority frustration that originally spurred Waters to write the album runs the risk of sounding petulant or excessively self-focused thirty years later.

Still, moments of jarring disconnect cropped up during the concert. As an album, The Wall worked because Waters fictionalized his experience using a character called Pink. This created distance between Waters and the music, and prevented the album from spiraling into narcissistic self-indulgence. Last night's show, however, felt like a dramatic performance of The Wall, starring Waters in the role of Pink. While this theatricality didn't detract from the show's overall effect, individual moments felt out of place. 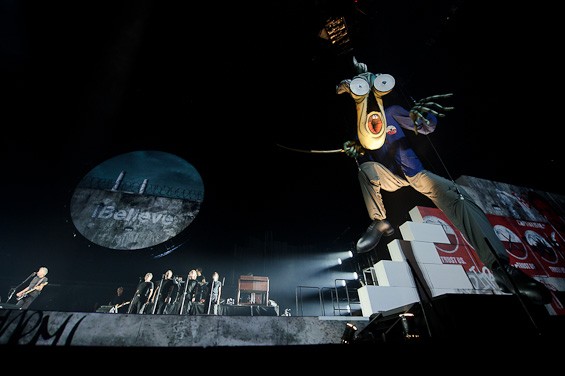 Originally, the wall represented a self-imposed barrier between Waters and the audience. Last night, it was treated almost like a fanciful creation; Waters shook his fists at it or hugged it like he was Dr. Frankenstein amazed at his scientific creature. During "Run Like Hell," Waters strolled over to the sides of the stage, grinning at the crowd's delight and encouraging them to cheer. He even exclaimed, "Enjoy yourselves!" - an odd exhortation for a pivotal concert moment that's supposedly filled with terror and panic. The juxtaposition of heavy, emotional imagery with these cheerful (and almost perfunctory) stage movements had a curious effect; Waters felt like a prog politician instead of a character immersed in the dystopian music.

As any Pink Floyd detractor will remark, self-indulgence and bloated excess shouldn't come as a surprise. And of course, it's not entirely fair to begrudge Waters his happiness or performing joy - after all, The Wall is a landmark musical achievement and creation, and this tour is an impressive, innovative undertaking. And Waters is clearly enjoying himself: When he performed "Mother" along with video of himself from the Wall's 1980 London performance, he introduced it as footage of "miserable young Roger of 30 years ago." Clearly, that person is no longer relatable. And in a way, that's fitting: The Wall works on several levels and has always been a fluid work of art -- one that's mutable and ever-evolving, whether politically, personally or emotionally. 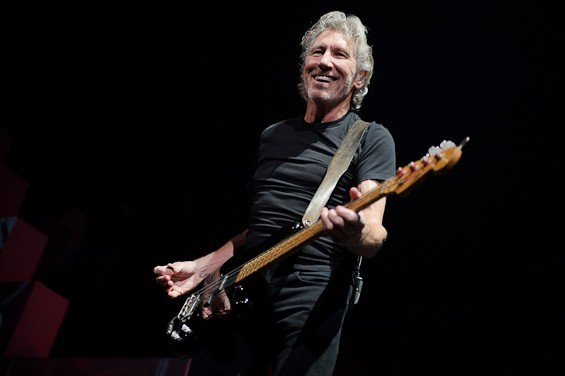 Critic's Notebook: The crowd was sporting a rather impressive, era-spanning array of Pink Floyd shirts and jackets.

Before the show, guitarist David Kilminster was sitting in the front row relaxing. Several fans noticed him, greeted him and took photos.

When Waters greeted the crowd, he asked, "Is the Fox Theatre still standing? I hope so."

Although not sold out, the venue was certainly packed and close to it. 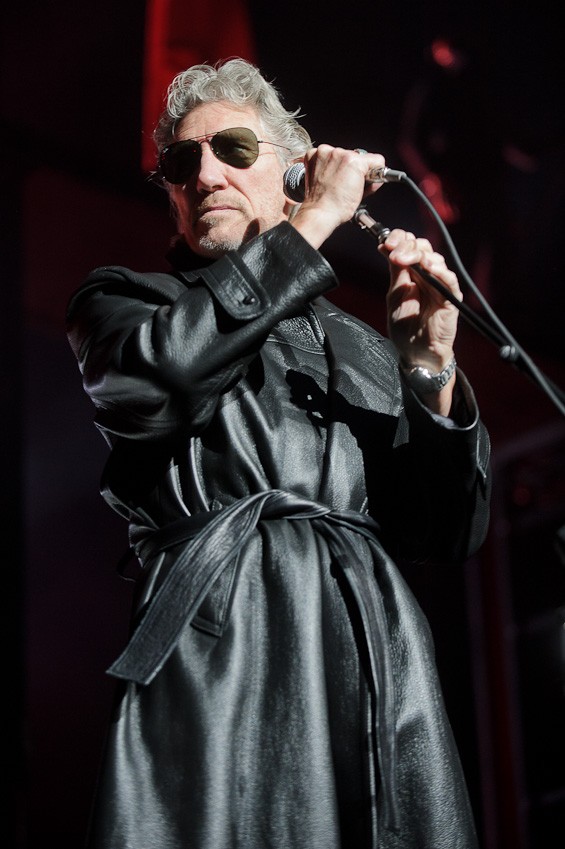 Set Two Hey You Is There Anybody Out There? Nobody Home Vera Bring The Boys Back Home Comfortably Numb The Show Must Go On In The Flesh Run Like Hell Waiting For The Worms Stop The Trial Outside The Wall