A deafening buzz surrounded Sleigh Bells even before the duo released its debut, Treats. The hype was somewhat perplexing: While its elephant-sized crunkbeats, razor-honed guitar riffs and Alexis Krauss' slam-poet-butterfly vocals are certainly arresting, the band's music isn't hugely groundbreaking.

View a Sleigh Bells slideshow from the band's Firebird show

First and foremost, the band's music is fun. It's music in which to be immersed, music to be felt, not dissected or analyzed. Thanks to a giant wall of Marshall half-stacks - eight, to be exact - the band's iPod-based rhythmic backing tracks and Derek Miller's industrial-metal guitars blasted through the packed venue. The fingersnap rhythm to "Kids" and the stepping-team syncopated foundation of "Infinity Guitars" in particular resonated -- the hyped-up crowd swayed, swelled and waved their arms along with the beats. Krauss' vocals, while flecked with distortion on the album, came through loud and clear in concert - breathy and angelic when called for, and laden with tough b-girl attitude when appropriate.

Yet Sleigh Bells' aggression isn't based in malice; it's based in something far more primal and positive. The band's having just as much fun onstage as the audience is. (Consider the concert experience shared exuberance that's egalitarian, not parasitic.) And unlike many other newer bands, apathy isn't a word in Sleigh Bells' vocabulary. Miller moves around the stage constantly, circling around Krauss as she acts as the band's vocalist-cum-hype-woman. (Their movements are the only stage gimmicks besides venue lights.) There's no trace of pretension or attitude anywhere.

Sleigh Bells emphasized this about halfway through the set, when some equipment problems cropped up as the duo started to play "Treats." The band joked about it being stand-up comedy time; Krauss then singled out an audience member who came to the show sporting a Burger King plastic crown and called him onstage. She lead the audience in an a cappella snippet from "Crown on the Ground" and promised he could come back onstage when they played the song. When Miller had further monitor problems a song later, the crowd displayed crossed-fingers in the air for luck when asked by the band to do so.

It's a testament to Krauss and Miller that they handled the unexpected intermission in a completely laid-back, chill way. Many other artists would've thrown a diva fit or complained; Sleigh Bells apologized for the delay. 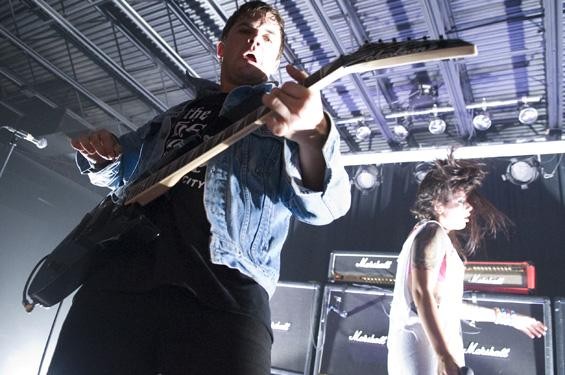 The crowd responded to this nonchalance and positive attitude. In fact, the vibe at the Firebird was completely lighthearted and even celebratory. Post-break, the set continued to gain steam, with the hip-hop squall "Holly" and an ecstatic, loping golf-clap "Rill Rill." As promised, when the crown-wearer came back in the spotlight to dance during the set-closing "Crown," the audience in front of the stage went absolutely nuts. Krauss and Miller thanked the crowd profusely for its time, and Krauss promised that it'd come back and "give you guys a proper show." Her mea culpa was hardly needed; the show was a refreshing change of pace.

The night's opening band, the Sundelles, was a pleasant surprise. The trio's sound was like a shoegaze Wavves or a Britpop band on vacation in California, what with its jangly riffs, guitar roars and rickety rhythms. But the band's efficient musicianship and tight live sound elevated its shambling indie-pop and psych-jangle into something special. Even its overused signifiers - like that "Just Like Honey" syncopated drum rhythm - didn't mar the overall effect. Stone Roses fans, take note.

Pictureplane - a.k.a. Travis Egedy -- was up next. The Denver-based musician appeared onstage bathed in dark, flickering light; accordingly, his set was polarizing and moody. On the one hand, its overly loud beats and music were the perfect warm-up for Sleigh Bells; the crowd down in front loved dancing to the amalgam of cheesy Europop, hammering techno and goth ghost-house. Yet the combination became overwhelming very quickly - if anything, it felt like the type of music you'd hear in a dim dorm-room party played by a drunk dude on a laptop. In short, Pictureplane was chaotic and grating in all the wrong ways.

Critic's Notebook: Sleigh Bells' sets are always that short. The equipment problems had no bearing on the show length.

The level of douchebaggery was shockingly low at the show.

Why yes, that was totally a snippet of Fleetwood Mac's super-gauzy '80s hit "Everywhere" that played before Sleigh Bells took the stage.

And that was Enigma's "Return to Innocence" pre-Pictureplane.