The Monads Splitting Up -- But Not Before Releasing One Last EP 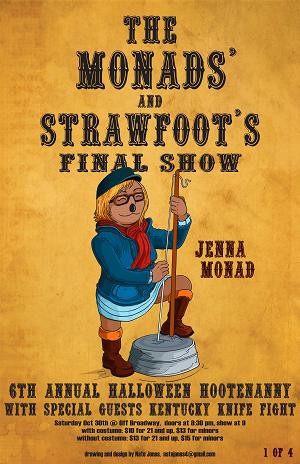 One of the city's beloved live bands, the Monads, is calling it quits after one last show this weekend at Off Broadway. Why the split? In a statement, the band simply says, "We are just looking to go different directions, musically, and thought it would be better to go out with a bang than a fizzle."

In its career, the Monads became well-known for its live shows -- where stomping tempos and unpredictable antics went hand-in-hand -- and for a unique blend of bluegrass, country, punk and folk.

"It's been way too wild a ride to pick any one memory as a favorite, but some definitely stand out," the band says. "The water balloon and TP battles at the RFT showcases and the beachball incident this last year were great. Our trip to Europe would stand out as one of our raddest accomplishments. Meeting Eugene Hutz while playing the Gogol Bordello afterparty and having him tell us we have great fire was awesome. And definitely all the places and people we have met along the way that made it worth doing."

This weekend's Halloween-themed show is also functioning as a release show for a new EP, Podunk, which the band recorded with Old Lights' David Beeman. ("That's 16 minutes of fury, I tell you," the band notes.)

So what's next for the band? "Matt and Jenna are going to continue playing while working and changing diapers," the group says. "Pat and Jason are sure to be seen about town as well, no doubt doing stuff. As far as what's planned for the last show, if you have been at any of our Halloween shows before, you know we go all out, and this is no exception. It's definitely a secret though, so come and see..."