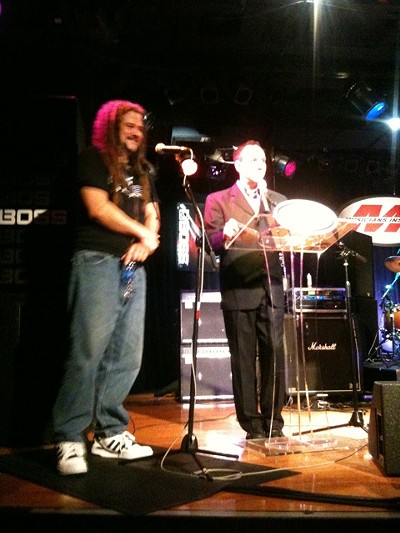 Years of paying dues in local bands and honing his one-man-band act paid off in a big way for multi-instrumentalist Phil Stendek last Saturday in Los Angeles, when he won the national portion of the Boss Loop Station Championship. Stendek was one of six finalists selected from a pool of 178 eligible YouTube entries who performed in front of a panel of six judges that included Police guitarist Andy Summers and Tonight Show bassist Derrick Murdock. Each contestant was given five minutes to play an original song or routine using their instruments and a set of Boss Loop Station pedals that record, loop and replays riffs. This allows artists to layer and play back tracks in a live performance.

That time limit posed a bit of a problem for Stendek, who played his reggae-flavored song "Nuclear Fusion." "When I soundchecked, the guy who was running the show comes up to me and goes, 'Did you time yourself?' and I was like 'No.' And he goes, 'You better make sure you don't go over, cause they'll deduct points for that.'" Stendek says. "So I just literally played the song faster and it totally screwed me up. I was playing the song about four clicks faster than I normally do and I almost turned it into a disco song."

This stumble made the competition close, but Stendek ultimately eked out a victory after much deliberation between the judges. For placing first, he won $3,000 worth of Boss gear and a spot in the World Championship contest, which will take place January 14 at the House of Blues in Anaheim. Stendek plans to use his winnings to make a pedal setup similar to the one he uses now so that he can ship it to his sister in Ireland for use in a future European tour. In addition to a world-tour, Stendek hopes to parlay his success in the contest to a sponsorship and, if offered, a job with Boss. "I'd love to be a product demonstration guy for Boss," he says. "That'd be so much fun to just go to Guitar Centers and just set up my stuff and just explain to people how to do this."

Even if he doesn't translate his success at the Boss Loop Station Championship into newer ventures, Stendek still has plenty to be proud of. "The president of Roland, which is the parent company of Boss, he came up to me and he told me he really liked what I did, which is a trip," he says. The contest also gave Stendek the impetus to work on his first solo studio album, a process he had put off for seven years. So far he has seven songs that he wants to tweak but liked well enough to share with judges that asked for a copy. He hopes to have a more polished disc to hand out at the World Championship.

Stendek also plans to make adjustments to his approach for his next competition. "The one thing that Andy Summers said that did stick in my head was that my performance was very conventional," he says. "For the Worlds, instead of doing a song, I'm going to do a routine where I pretty much demonstrate everything you can do with the pedal."

Specifically? "I'm going to take one of my songs and I'm going to just change it up so it has all these gimmicky parts in it. I'm going to have a part in the middle where I start playing harmonica into a telephone. I'm going to build the beat out of junk - I've got a box of junk and I'm just going to bang on it."

Until then, you can catch Stendek at various shows around town, starting with his appearance November 5 at the Tin Can Tavern on Morganford Road.