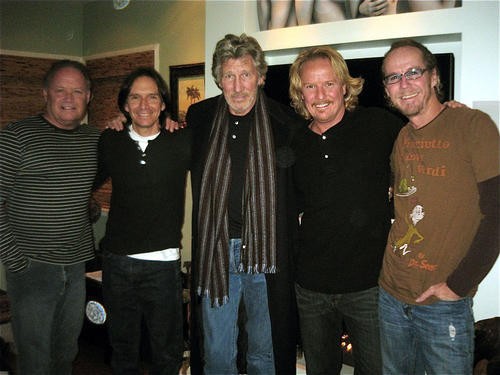 In this week's paper, Matt Wardlaw spoke to Kipp Lennon of the band Venice. Lennon and two of his bandmates are part of the backing band for Roger Waters' The Wall tour, which is stopping by the Scottrade Center on Friday, October 29. Lennon is no stranger to St. Louis; his grandfather was a journalist here, and he still has family members living in Branson, Missouri. In the outtakes below, Lennon discusses Waters' artistry and explains why the Anti-Defamation League's protest of the show is misguided.

Matt Wardlaw: Having seen your normal band, Venice, something that really stuck out to me as a major difference in the Waters show is the statue like appearance that the background vocalists maintain throughout most of the show. How difficult is that? Kipp Lennon: [Laughs] It's strange when you come from where we came from. Roger's really, really hands on when it comes to [the show]. We'll rehearse a song and then he'll go out to the front of house and watch it over again so he can see what it looks like and how it matches up with the art. He's wearing all of those hats at once and constantly refining [the show]. So one of the days he said "Hey guys, you need to hold really, really still for this, because it is so beautiful with the art when you guys are all standing there, it's like you're Terracotta soldiers and it's got this real stark kind of look to it but it really goes with the art." He said "I know it might be difficult for you but from back here, it's really complimentary to all of the artwork." He did the same [thing] to [vocalist] Robbie [Wyckoff], who's the guy that's singing all of the Gilmour parts.

We all come from bands, so we're used to performing. But this isn't a concert, it's different than that - Roger thinks of this as theater. So we're all pieces of some bigger puzzle and that's fine - we all have our own bands to do what we want. And truthfully, I wasn't really relishing the idea of that part of background singing, you know where you step to the left and the right and you snap your fingers all together and the whole nine, you know? I'm not a big fan of that anyway. I was glad when he limited what we were doing and made it more about the vocals. It's a little strange, but now we're getting into the weirdness of all this crazy electricity and energy when you walk in and you start the show and yet you stand there stark still with people going apeshit around you. It's pretty cool. And we're allowed to do a couple of things - I play percussion on a few songs and we raise our hands up and put them on the mics when we sing "Goodbye Blue Sky," so there's a few things.

And even since you've seen the show last, Roger added a few things for us to do. Like when we come out in front of the wall and do "The Show Must Go On," we used to stand there like soldiers with our hands behind our backs and literally three shows ago, he asked us to do more like a street singing/doo-wop, almost-Temptations kind of choreography. Which I think is really cool with our Gestapo outfits and sunglasses, it looks really cool and it gives us something to do.

One of the other interesting aspects of the show is the fact that because of the storyline, you spend a large portion of the show performing behind the wall. What kind of environment is that for you as a performer? [Laughs] I was just talking with Harry [Waters] about it today. Harry is Roger's son and he plays keyboards in the band. We were just having breakfast today and we were laughing about what the atmosphere is like behind the wall. What happens is it's two things - you get so amped to do these shows, but they're not really concerts, you know? It's more about Roger, and him getting his message across and his songs. It's really, really fun but you get this buildup and then you're not really in front of the audience that much. You're still getting to do these amazing songs and make fifteen thousand people really happy, but it's just different than your normal sweaty nightclub atmosphere. So we get behind the wall for the second half and it's actually a lot of fun because then it's just all about execution and in between we're making each other laugh, doing stuff and just hanging out. And the guys, when they're not playing on a song, are walking over and hanging out with everybody else and nobody can see us back there, so it's pretty cool.

Like for instance, when I sing the high parts on "Comfortably Numb," to me that's my favorite part of the whole night because I get to sing full voice and it's such an iconic song. Robbie's up there on top of the wall singing Gilmour's parts, but I'm doing the parts that are above that - and these are the parts that I sang along [with] in my car, listening to these songs on the radio my whole life. So when I do that, I always take my mic out of the stand and walk over to a corner of the stage and sort of feel like I'm singing for fifteen thousand people, even if I'm not in front of them, so I can really emote and really feel that song, because it's really the most powerful song of the night for me. And I still get that rush - it does feel like we're in an arena, even though I'm literally standing behind the wall. It's a thrill, you know? It's a completely novel experience as you can imagine, for all of us. So running around, changing clothes and going under the stage and getting ready and all of that stuff, it's really cool.

There was some controversy leading up to the beginning of this tour with regards to the themes and imagery that are part of the show. Have you guys encountered any side effects from that stuff out on the road? Sometimes the ACLU and all of these other things [such as the Anti-Defamation League], they're so well-intentioned and they come from such a good place, defending people who need it. But then sometimes they take a stand about stuff that's just so trivial and they should spend their energy on things that are important. With Roger, [the Anti-Defamation League] suddenly decided that this show is anti-Semitic, because it drops the Star of David like bombs out of a plane. But what they don't talk about is that it is also dropping crucifixes, crescents, Mercedes [logo] signs, Shell Oil [logos] and dollar signs. The whole point is these are all institutions that potentially can divide people, destroy communities and use up everyone's money and resources and build up the wall of the earth, separating people. That's his [Roger's] whole point is how even-handed the whole show is - it's never about one race or one country or anything.

He's saying [to] take a look at all of our leaders and be suspicious of everything and don't have blind faith and question authority, but in a good way, like, Let's make some shit happen around here. Consequently, stuff like that is just baffling that they would think that it's anti-Semitic. I guess combined with the sort of Nuremberg rally-type look of the second half... but even that's meant to be mocking how powerful rock stars can become and the complete idolatry of pop stars and everything else to the millionth degree is like Hitler and Nuremberg, you know? [It's like] propaganda. That's the whole point of us all dressing like Gestapo and it looking like Albert Speer architecture and all of that. It's supposed to be shocking and disturbing and it's supposed to be mocking it at the same time. It's not celebrating the Nazi [culture] at all! [Laughs]

Money, experience or anything, I wouldn't take any of it if it meant that I was part of some sort of racist or anything kind of show. And he is so diligently the opposite of that, it's a pleasure to be a part of this thing and to be able to sort of take a jab at the Nazis and also put on a good show at the same time! [Laughs].

From reading your tour blog, I know that as a sports nut, you're really enjoying the opportunity to visit all of these arenas. Are you collecting any specific souvenirs along the way? [Laughs] I am not. I'm taking pictures of like sports logos, in front of the locker rooms, you know? That's mostly just for my kids. I did get a practice puck yesterday at the Nassau Coliseum, you know the Islanders play there and they had some practice pucks backstage, so I took one of those for my kids. I suppose I could have taken a hockey helmet last night, but I don't think I want to carry that with me to 56 more towns! Mostly it's just the experience of hanging out there that is really cool.