Tonight's Tuesday, but you'd be forgiven for mistaking it for a weekend night -- after all, there's a ton going on. A recap: 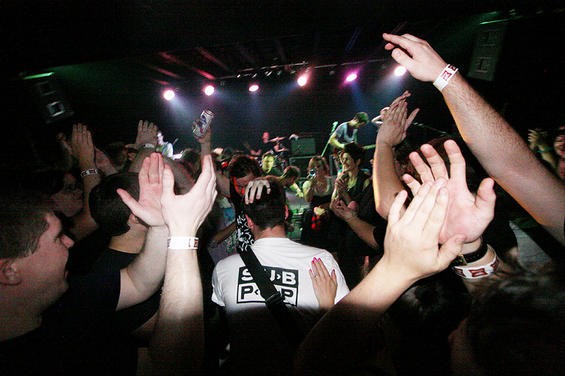 *Los Campesinos! with Johnny Foreigner at the Firebird The kicky, cheeky indie troupe LC! has given St. Louis plenty of love in the last few years -- check out a slideshow of last August's Firebird show and a review of its February 2009 Gargoyle show. Return the favor by heading to the Firebird tonight for the band's encore appearance, as it comes to town in support of this year's Romance is Boring LP and All's Well That Ends EP. Be sure to show up early to see noisy, shambling openers Johnny Foreigner. 9 p.m. $15.

*Active Child @ the Billiken Club In this week's paper, Diana Benanti previewed Active Child. She described the group's sound: "Pat Grossi's seraphic vox ooze over cavernous synthpop and beatific harp on "I'm in Your Church at Night" (told you he was a choir boy), while the haunting austerity of "Wilderness" showcases sonic depth." Free. 9 p.m.

*Motion City Soundtrack/Saves the Day/Say Anything/Valencia @ the Pageant Motion City Soundtrack's Moog-driven nervous breakdowns are full of clever wordplay and hooks; this year's My Dinosaur Life might be the band's most mature effort yet. Erudite genre smashers Say Anything and emo-pop stalwarts Saves the Day are also performing. Valencia rounds out the bill. 6:30 p.m. $25

*Dawes/Peter Wolf Crier/The Romany Rye @ The Gargoyle Dawes impressed opening for Edward Sharpe & the Magnetic Zeros back in June. See 'em headline at the Gargoyle tonight; previewer Katie Moulton notes, "Dawes is part of a new wave of west coast folk-rock acts who are young, sincere and sound like the vinyl your parents grooved to in the '70s. In fact, the band's breezy harmonies, heartfelt lyrics and California-country are most often compared to touchstones of the previous generation, such as Crosby, Stills, Nash & Young." 8 p.m. Free for Wash. U. students with a valid ID, $10 for the general public.