Show Review + Photos + Setlist: of Montreal Delights With an Extravagant Performance at the Pageant, Friday, October 21

(For a review of opener Janelle Monae at the Pageant, go here.) 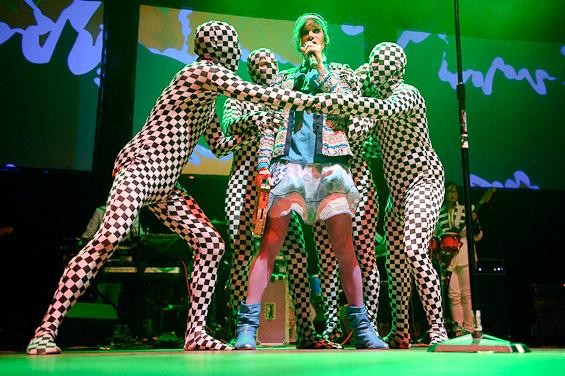 Some bands are content to let their music speak for itself in concert, while others like to go all-out in making their show a production. With a stage show involving actors in full bodysuits and an array of headgear, bikini-clad cape dancers and an Easter Island-inspired helmet which shot feathers, of Montreal falls decidedly into the latter camp. Truly, the band's concert experience can't be captured through a bootleg or even Youtube -- you have to be there. Thanks to this spectacle, the group's excellent performance last night at The Pageant had a festive, anything-goes atmosphere. Combined with a well-chosen setlist, the night was a joyous shock to the senses.

of Montreal set the tone for its show right away: Two people with fish heads draped in Chinese New Year outfits slogged across the stage, acknowledged the crowd and then left. This somehow gave way to frontman Kevin Barnes skipping onto the stage for the cheery disco of "I Feel Ya Strutter," a song featuring his now-familiar falsetto. By the second song, "Wraith Pinned To The Mist," of Montreal had the crowd fully converted; those in the pit were dancing or clapping. The good feeling carried over through the entirety of the set, which was mostly this year's solid False Priest on shuffle.

The album's glammed-up, synth-heavy disco-funk proved well suited to the aforementioned spectacle. Costumed dancers acted out mini-scenes with or around Barnes, alternately carrying, encircling, provoking or dancing with him as he sang. The absurdity hit its peak in "Girl Named Hello" when Barnes and a girl in a bodysuit and pig mask started humping, much to the chagrin of a male "pig" smitten with the girl. ("I thought you didn't eat this, I thought you were kosher," Barnes commented.) Thankfully, the group paced these scenes well so that they never overwhelmed the show. 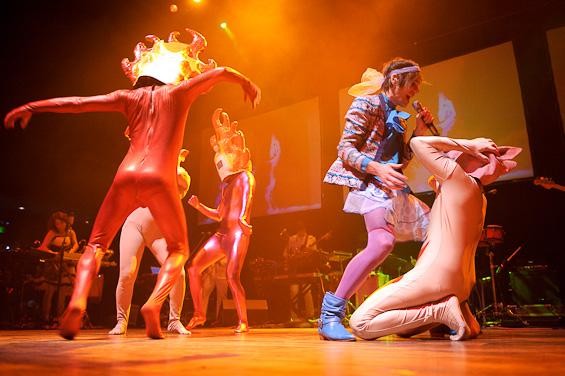 The musicianship on display deserves a mention as well. of Montreal, which played as an eight-piece for this tour, covered every intricacy of Barnes' dense arrangements through an arsenal of keyboards, guitars, percussion and Nicholas Dobbratz's violin. More impressive, the group did this without ever sounding cluttered. From the snappy funk of "Hydra Fancies" and "Like A Tourist" to the propulsive electropop of "Heimdalsgate Like A Promethean Curse" and "Enemy Gene" (on which stellar opener Janelle Monáe made a welcome appearance), of Montreal faithfully translated the recordings to the stage.

The band also took some opportunities to jam. A significant portion of the crowd seemed put off by the long R&B workout coda to "St. Exquisite's Confessions," but everyone was on board for the dueling leads between Dobbratz and guitarist Bryan Poole at the end of a forceful, rocking "She's a Rejecter." Likewise, a percussion breakdown in "Sex Karma" went over well. In keeping with the stage show's great pacing, Barnes' solo piano cover of Sibylle Baier's "Tonight" proved a nice breather from his band's busy arrangements, before the group finished its set with more up-tempo body-shaking tunes.

After exhausting its own supply of dance grooves, Barnes and company returned for a can't-miss encore medley of Michael Jackson's catchiest work. It almost felt like cheating for the group to use such popular party jams, but damn if it wasn't a good time. Janelle Monáe's band and dancers came out to revel in the fun as everyone got down to "Thriller" and "Wanna Be Startin' Somethin'." Monáe herself came out to belt out the bridge for closer "P.Y.T." and send the whole operation into overdrive, ending the show in fine fashion.

1. I Feel Ya Strutter 2. Wraith Pinned To The Mist (and other games) 3. Suffer for Fashion 4. Our Riotous Defects 5. Like A Tourist 6. Sex Karma 7. Girl Named Hello 8. St. Exquisite's Confessions 9. Enemy Gene (with Janelle Monáe) 10. Hydra Fancies 11. She's a Rejecter 12. Tonight (backstage, Kevin alone on piano (Sibylle Baier cover) 13. Casualty of You (? Not 100% sure on this) 14. Around the Way 15. Heimdalsgate Like A Promethean Curse 16. Coquet Coquette 17. For Our Elegant Castle 18. A Sentence Of Sorts In Kongsvinger