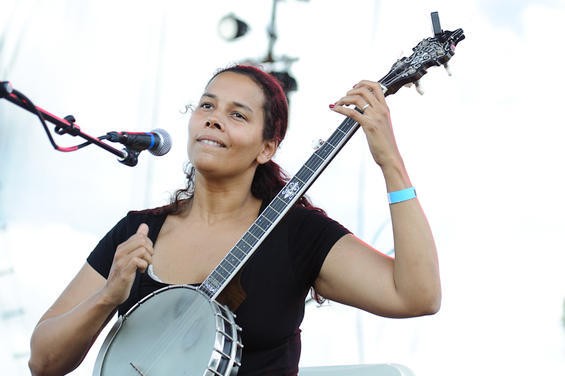 Three shows in the same city might be a bit much for some artists, but not Carolina Chocolate Drops, who played to a raucous, packed house at the Sheldon Thursday night.

Three songs into the set, vocalist and multi-instrumentalist Rhiannon Giddens said, "This is the part where we like to invite people to participate. But I feel like I'm preaching to the choir." The audience was whopping, stomping, and thundering with applause from the moment the band took the stage. She proceeded to teach the crowd the chorus to "Don't Get Trouble in Your Mind," before the three-piece launched into the song. The crowd took advantage of the Sheldon's old-church acoustics -- every voice lifted, every foot stomped until the seats shook.

The band swapped instruments with grace while sharing vocal duties; among those instruments used include banjo (four- and five-string), fiddles, jugs, kazoos, bones, snare drum, guitar and harmonica. Dom Flemons, who said in an interview this week that the band is working on a vaudeville project, delved into the old entertainer tradition. He danced, hammed it up, cracked jokes and got down-right acrobatic with tossing his acoustic guitar in the air, without letting his showmanship interfere with his impeccable music performance.

Flemons had the stage to himself for the classic Memphis breakdown of "Ain't it a Good Thing." He asked the audience if they preferred acoustic guitar or banjo for the song; the audience roared for banjo. "It's a funny time in this world when banjo gets more requests than guitar," he laughed. "It's good times."

An accomplished rhythm bones player, Flemons invited Scott Miller, a fellow bones player he discovered on YouTube, to join them while Giddens played a minstrel banjo piece from John Briggs' 250-year-old "The Banjo Instructor" book. Miller and Flemons played off each other, the former's style more quiet and tight, the latter's rumbling and loud.

Giddens, who trained and performed as an opera singer, filled the venue with the strength of her voice, from her sweet background harmonies with Flemons ("Your Baby Ain't Sweet Like Mine") and Justin Robinson ("Cornbread and Butterbeans"), to a woman-scorned, haunted howl on "Hit 'Em Up Style" that the song's original singer, Blu Cantrell, could only dream of achieving.

She introduced songs with relaxed history lessons about the tunes, instruments and the history of the black string music they've revived from near-extinction. While this could have come off as too scholarly for a concert, Giddens' tone was that of one music lover sharing her passion and enthusiasm with other music-lovers.

During "Salty Dog" she took to the side of the stage and busted into a modernized Charleston, dancing herself breathless. And after her kazoo solo in "Your Baby Ain't Sweet Like Mine", she explained, "I never learned to play horns, so I went the economical way." (Flemons adds that Giddens originally scoffed at the prospect of adding kazoo to the mix.) Justin Robinson's the most reserved performer, barely saying a word. He didn't have to; his vocals conveyed a depth of feeling that requires no explanation. (It's hard to imagine him in a tale told by Giddens as the fiddler who returned from a festival remembering only one song - "Old Cat Died" - because he imbibed too much.) Robinson adopted the plain-folk tone for the ode to simple life, "Cornbread and Butterbeans," then switches to the machismo of Johnny Cash in "Jackson". The duet with Giddens moved people to disregard the tight confines of the Sheldon and dance, scream and fill the house with a vibrating enthusiasm. As beautiful as his voice and fiddling are, Robinson shines when he beat-boxes, which gave a somber backbone to "Hit 'Em Up Style."

Sitting in a chair, executing three flat-foot stomps and a clap to set the rhythm for "Snowden's Jig," Robinson doesn't smile, casting a haunting look at the audience, who adopted his methodical stomp-and-clap beat while Giddens fiddled and Flemons clacked the bones. There's no thinking involved in joining Robinson; it's instinct to join his rhythm. Mesmerizing. And it melts any walls between performer and audience, creating the community music Giddens describe early in the show.

The band returned for an a cappella encore of the classic hymn, "Sit Down, Servant" to a standing ovation ... which ended after the first commanding chorus of repeated, "sit downs". When the crowd sat, en masse, the band paused to laugh at the crowd's obedience, embracing the spontaneity, the connection between performer and audience while every voice filled the Sheldon.