St. Louis concertgoers had some deciding to do last night. A number of fine shows -- Free Energy/Foxy Shazam/Hollerado at the Old Rock House, Carolina Chocolate Drops at the Sheldon and the Walkmen/Japandroids at Off Broadway -- graced our fair city. Judging by the sold out crowd at the latter venue, several hundred folks chose to see the New York quintet's wailing, vintage-sounding indie rock.

View a slideshow of Walkmen/Japandroids photos from Off Broadway

As the band members subtly filed on stage, donning their classic prep school attire, they eased into the bouncy, slow-burning "Juveniles," from 2010's Lisbon. Fresh-faced singer Hamilton Leithauser ("Ham") seemed calm and reserved as the set opened, but by the time the band hit the second song ("Angela Surf City"), Ham was already blazing and the vein bulging from his neck was as thick as the mic stand supporting him.

The rest of the band was just as animated. One minute, guitarist Paul Maroon's rapid-fire strumming made the hair on your neck spike; the next, he'd suddenly fade out and let a note ring, which was equally gratifying. Peter Bauer drenched the sound with his woozy organ, and provided texture with his clinking calypso keys (see "Woe is Me"). For those in the back, it seemed as if Bauer was there one minute, and then would disappear, even as the keys kept ringing. He did stand to deliver a twinkling triangle solo on a smoky rendition of "While I Shovel Snow."

All things considered though, it's Ham's sinister howl that defines the band. A musician buddy of mine was touring with the Walkmen a couple of years back and explained it quite simply: "He's so damn huge, [his wailing scream] starts low in his diaphragm and eventually explodes from his mouth." It's comparable to a volcano, really. He's got the poise of all the great crooners, but he also has this demented -- almost possessed -- edge.

By the time the band lunged into the second song of their encore, its swan song, "The Rat," all cylinders were firing and the crowd was locked in with heads bobbing in unison. Everyone seemed perfectly content with their decision to take in The Walkmen over the other competing shows on Wednesday night. 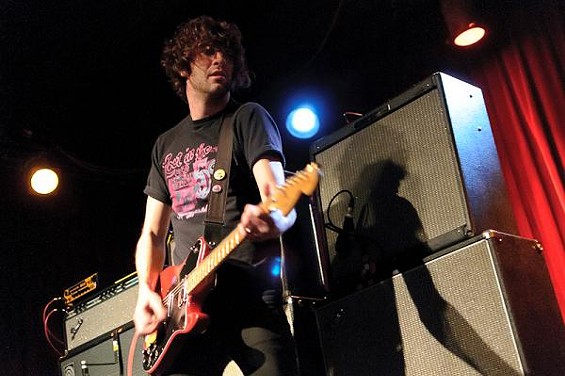 Vancouver's Japandroids opened the show. Although it's a guitar/drum duo, singer/guitarist Brian King's five-stack of Fender cabs may as well be considered the band's unofficial third member. King's wall of spazz-guitar sound roared through the club, as Dave Prowse's start-stop stutter beats were almost confusing, albeit enjoyable.

Show Notes: *In anticipation of a packed house, the fine folks at Off Broadway switched up the entrance procedure and had the walk-in line at the side door patio entrance. The switch made sense; it'll be interesting to see if they stick with this setup. *Apparently, shopping at the Walkmen's merch table is like shopping at the Apple store. The band's merch lackey was swiping credit cards with her iPhone.

Setlist: Juveniles Angela Surf City Woe is Me Blue as Your Blood Victory Canadian Girl While I Shovel the Snow We've Been Had All the Hands and the Cook Everyone Who Pretended to Like Me is Gone Louisiana Look Out the Window In the New Year