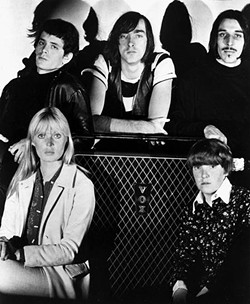 In April 2009, WALB-TV aired a story about a Tea Party rally in nearby Tifton, Georgia. About two-and-a-half minutes into the feature, one "Maureen Tucker, Tea Party Supporter" was quoted as saying, "I'm furious about the way we're being led toward socialism. I'm furious about the incredible waste of money, when things that we really need and are important get dropped, because there's no money left."

Eighteen months later, the news story somehow ended up posted on YouTube, and the blogosphere started buzzing. Could this actually be Moe Tucker, former drummer for the Velvet Underground, one of the most influential and iconic rock bands of all time? All signs pointed to yes. It certainly looked like Tucker, and it was well known that she'd moved to southern Georgia with her family decades earlier. The Huffington Post confirmed the story by reaching Tucker at home; she wouldn't discuss the matter or her political views any further.

For a few days - practically dog years in Internet time - the reaction was swift and furious. Liberals declared themselves depressed and shocked that one of their idols was caught on tape speaking out against a Democratic administration. Some conservatives, meanwhile, congratulated her on her courage and welcomed her to their presumptive fold next to noted right-wing rockers Johnny Ramone and Alice Cooper.

We were curious to know more from Tucker herself, so we tracked her down and asked for an interview. She agreed to answer some questions via email.

Mike Appelstein: In the now-infamous videotape, you indicated that you're furious about the way we're being led toward socialism and "incredible waste of money" being spent. Could you elaborate a bit on these sentiments?
Moe Tucker: No country can provide all things for all citizens. There comes a point where it just isn't possible, and it's proven to be a failure everywhere it's been tried. I am not oblivious to the plight of the poor, but I don't see any reason/sense to the idea that everyone has to have everything, especially when the economy is so bad. I see that philosophy as merely a ploy to control.

I am also against the government taking over the student loan program, car companies, bailouts and the White House taking control of the census (what the hell is that all about?); [about] any First Lady telling (I know, I know, "suggesting to") us what to eat, the mayor of New York City declaring "no salt" (screw you, pal!), the mayor/city commissioners of Anytown, U.S.A. declaring you can't fly a flag, can't say the Pledge of Allegiance and can't sing the National Anthem. I'm against a President dismissing any and all who dare to disagree; the water being turned off in (central) California, at [an] area where they've turned off the water because they want to save a one-inch fish -- turning that huge area of farming land into another dustbowl -- the insipid start of food supply control methinks! The government deciding what kind of lightbulbs we can use (all you "think green" people, three objections to this b.s.: 1) Those bulbs give off the light of a candle; 2) They're very expensive; 3) They have mercury in them - how the hell are we supposed to dispose of them?).

As a lead-in to the next part of your question: Today it was announced that there would be no cost of living increase for Social Security recipients because "there's no inflation." I'd love to know what makes them think that! Where the hell do they shop? Prices have been rising for over a year. Inflation is a natural happening, I know. But why is it that suddenly food prices don't go up two or three or five cents, but instead they're going up 40, 50, 60 cents at a clip? No inflation my ass!

My anger stems from the unbelievable (criminal!) waste of money on pork and earmarks. It drives me nuts to see that X millions are being allocated to build a turtle tunnel, a donkey museum, a salamander crossing, etc, etc, etc. Billions spent every friggin' year on totally unnecessary crap so that these Congressbums can tell their constituents that they "brought home the bacon" and get re-elected. I'm sorry, but I don't want to pay for any Congress SOB's vote buying, and sure as hell not in these very very worrisome times!

What specifically about the current administration do you disagree with?
I disagree with spending / borrowing / printing -- damn the torpedoes, full speed ahead!  I disagree with the "we won" attitude, which is the cowardly way of saying fuck you! I disagree with an administration that for twenty months blames Bush. If the President and his minions are so damn smart, why didn't they know the severity of the situation? The president has actually said (and I saw it on video) that they didn't know!

What would you like to see change?
The current administration!

How did you get involved with the local Tea Party movement?
I'm not "involved" with the local movement. I went to the first Tea Party in June or July of 2009 because it was within striking distance and I wanted to be counted.

Are you still involved in Tea Party activities?
I do my own protesting via email and postcards. Anyone who thinks I'm crazy about Sarah Palin, Bush, etc. has made quite the presumption. I have voted Democrat all my life, until I started listening to what Obama was promising and started wondering how the hell will this utopian dream land be paid for? For those who actually believe that their taxes won't go up in order to pay for all this insanity: good luck!

What are some misconceptions that people have about Tea Parties (and their attendants) in general?
That they're all racists, they're all religious nuts, they're all uninformed, they're all stupid, they want no taxes at all and no regulations whatsoever. Those "arguments" are presented by the Dems in order to keep their base of uninformed voters on their side. In my opinion, as soon as you start name-calling, your opinion is immediately deemed invalid!

Have you always had conservative views?
To be honest, I never paid attention to what the hell was going on. My always voting Democrat was the result of that. My philosophy was and is all politicians are liars, bums and cheats. I make decisions on an issue by issue basis. I'm far more of an independent than a conservative or liberal. I don't agree with all of either side, and I think anyone who claims to is either a fool or a damn liar.

Did your experience working at Wal-Mart influence you?
I don't think so. I did some protesting there, too!

When you consented to an interview with that television reporter, did you envision that your words would be spread online a year and a half later?
No. I'm amazed at this.

What are your feelings about the online reactions? Many people seem upset or outraged.
I'm stunned that so many people who call themselves liberal yet are completely intolerant. I thought liberals loved everyone: the poor, the immigrant, the gays, the handicapped, the minorities, dogs, cats, all eye colors, all hair colors! Peace, love, bull! Curious they have no tolerance whatsoever for anyone who doesn't think exactly as they do. You disagree and you're immediately called a fool, a Nazi, a racist. That's pretty f'd up!! I would never judge someone based on their political views. Their honesty, integrity, kindness to others, generosity? Yes. Politics? No!

And yet there is also a minority that agrees with you.
There are a lot more than you think who agree with me.

In your experience, are there other closet conservatives in the music/art world? (Without naming names, of course.)
I don't consider myself a "closet" anything! That TV reporter was the first who ever asked me what my political views might be. I'm sure there are plenty of conservatives in the music/art world since I don't believe there's any group, club, organization or profession in which all members think exactly the same.

Moving away from politics: Are you still involved in music? Have you continued recording or songwriting these past few years?
No time for it anymore. I take care of my eight-year-old grandson and it's a full-time job. He wears me out, keeps me laughing, and I love him to pieces!