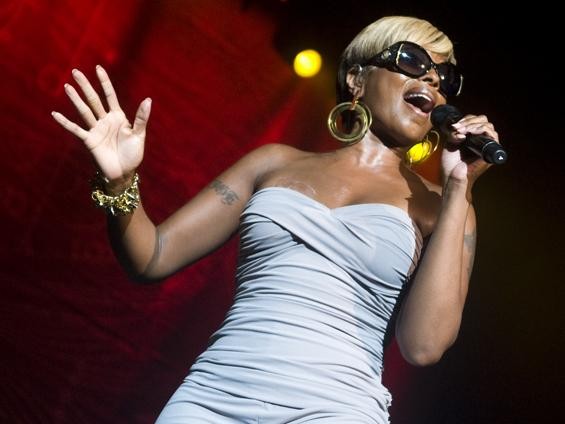 Exactly three months after her show-stealing performance at Lilith Fair, R&B icon Mary J. Blige returned to St. Louis to indulge her fans in the more intimate setting of the Fabulous Fox Theatre. The "Music Saved My Life" tour mixed the old-school with the new; the concert last night also featured El DeBarge (who was originally scheduled to headline a show at the Roberts Orpheum Theater) on the same bill with Jazmine Sullivan and newcomer Miguel.

The show was slated for an 8 p.m. start, and so when I arrived promptly at 8, I was disappointed to learn that Miguel had already been up. The chatter from the smoking lounge (a.k.a. the alley by the dumpsters) was that he performed well, and his two-song set left the crowd wanting more.

I did manage to catch Jazmine Sullivan's gangster-themed intro, where she ordered a hit on an unnamed target. The bit led into "Bust Your Windows," with Jaz wearing an all-black pant-suit and a red rose, while her background singers were decked out in '20s-style costumes. The stage was decorated with a classic curtain backdrop with two-tone lighting and several bandstands.

Sullivan's butter-smooth vocals sounded great live. The songwriter-turned-songstress covered SWV's hit "Weak," and played her own hits "In Love with Another Man" and "Holding You Down (Goin' in Circles)," the latter of which featured a dance break over BBD's "Poison." She ended her half-hour set with her breakout hit, "Need U Bad."

The multi-talented El DeBarge was up next, leading off with a mix of "Stay with Me" and the Biggie version of said sample, "One More Chance." He followed up with "All This Love" and "I Call Your Name," for which he also played the keyboard. His latest offering "Second Chance" was then followed by "I Like It," which had many of the women in the audience on their feet and screaming. Considering his age and his much-publicized drug/legal issues, the kid doesn't seem to have lost a step. His falsetto still sounds great, and he didn't miss one note - not even while jumping all around the stage on his finale "Rhythm of the Night."

After intermission, the lights went up to reveal a NYC skyline backdrop for MJB's set as she sang her version of Game's "Hate it or Love it." Mary's set featured a bigger band, more background singers and a glowing mic stand. She proceeded to run through her illustrious catalog, usually performing just one verse of a song before moving on to the next. She played "Be Happy," "You Remind Me" and "Real Love" before breaking out into her own dance solo, while the crowd chanted "Go Mary!" It had a very '90's vibe; and just in case you'd forgotten, Mary can move.

The background changed over to a starlight theme, as she performed "Every Day it Rains," "Love Is All We Need" and "Love No Limit" before sitting on a black throne for "Seven Days." Mary had the audience help her sing "I'm Goin' Down" before an 'unplugged' version of "As I am." She closed with "Just Fine," and saved "Be Without You" for the encore after thanking the crowd for their energy. Given the quality of her performance and the breadth of her setlist, you would be hard-pressed to find a fan who didn't leave satisfied.