The Paste Tour brought together a hodge-podge of big talent to Off Broadway last night, and despite a disconnect in pacing between the first and second halves, the show was a solid showcase of guitar-heavy up-and-comers.

Mimicking Birds seemed to sneak in the side door with a quiet, acoustic-based set. Sticking to their time limit, the Portland, Oregon, trio led by singer-songwriter Nate Lacy played five songs that painted an atmosphere of rain-drenched cedars. Beginning with "New Doomsdays," each song packed the gorgeous chill of Ryan Adams' version of Oasis' "Wonderwall." Lacy handles his poetic lyrics with care, which may be why Modest Mouse's Isaac Brock leapt to produce Mimicking Birds' 2009 debut on his Glacial Pace Records. Ian Luxton, ever restrained on electric guitar and high harmony, provided smiling, melancholic stage banter: "It's nice to be back in the land of Waffle House," adding that if they had the greasy spoon chain at home, "we probably wouldn't enjoy them as much." These guys would definitely make the soundtrack of Garden State 2, as they closed with "The Loop," a curling and haunting riff.

Though the room was sparsely populated during Mimicking Birds' set, the growing crowd (the largest of the tour thus-far, according to Luxton of M.B.) was ready to mix and mingle by the time Jesse Sykes and Phil Wandscher took the stage. Seated and cradling guitars, the duo spun low-key folk laments. Wandscher is a member of Sykes' band the Sweet Hereafter, but was formerly a member of '90s alt-country trailblazers Whiskeytown. His lonely-road electric guitar added depth to Sykes' breathy country-noir; so did his high harmonies on songs such as "Spectral Beings," during which the pair sounded like echoing ghosts. While lovely, was this a Friday-night set? Maybe not. The crowd didn't seem to think so and talked noisily throughout. Sykes commented unselfconsciously on the "beautiful and sad" mood of her songs, thanking everyone for listening while stoking anticipation for the dance party ahead - all the while remaining ethereal yet down-to-earth. 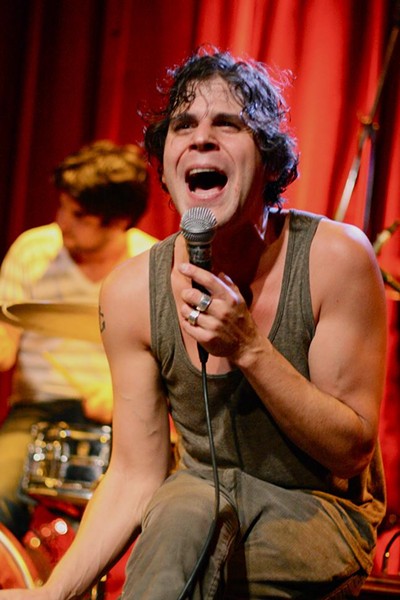 With a big step off the top of an amp, Langhorne Slim kicked off his set and gave everybody whiplash. The on-stage energy went from negative-60 to 60 as Slim and his band the War Eagles launched into the insistent anthem "Say Yes," off his latest release Be Set Free. Using his charming, eccentric showmanship as audience defibrillator, Slim was off the stage and into the crowd by the second thrashing song. On "Rebel Side of Heaven," usual elements of horns and organ weren't missed too much while Slim's winking lyrics moved to the front: "I don't wanna leave you, but in time you're gonna see that I ain't kidding." On call-and-response "Cinderella," Slim's band matched its leader in playful vigor - Jeff Ratner with upbeat grooves on upright bass, Malachi DeLorenzo on drums and David Moore joyfully brutalizing both keys and banjo. Working against audience inertia, Slim tried to incite a folk rave until the end - "We're all together, might as well freak out" - and with soulman shredding and shout-along choruses, he did a bang-up job.

The crowd got going - finally - when headliners Jason Isbell and the 400 Unit took the stage. The former Drive-By Trucker is a fan-favorite among St. Louisans, and Isbell returned the love with a deep-cut-laden, long-running set that put balanced guitar heroics and Isbell's cut-to-the-quick lyrics at the forefront. Straight out the gates with Isbell-penned Trucker track "Never Gonna Change," Isbell set the tone: extended guitar-snarling jams to come. Between songs, band members - Jimbo Hart on bass, Chad Gamble on drums and Derry deBorja (formerly of Son Volt) on keyboards - swigged from a passed-around bottle of Jack Daniels. With the first chords of each Southern elegy, the fan reaction seemed stronger than the last - from "Outfit," the swinging country ode to Isbell's father, to gentle military requiem "Dress Blues." Despite heavy subject matter, the pace never flagged, and Isbell got the crowd grooving with the dirty swamp-rock of "Try" as well as covers of "(Sittin' On) The Dock of the Bay" and "American Girl." While the covers were fun, the real excitement is Isbell's own work. He doesn't need to recreate a Mike Campbell solo tear - he has chops to spare.

Critic's Notebook: First things noted when Jason Isbell and the 400 Unit appeared: The absence of "other guitarist" Browan Lollar -- where is he? Touring with Azure Ray! -- and Isbell's conspicuous footwear: brown Skechers Shape Ups. A fan nearby explained that lugging around a huge guitar all night may require extra sole support - but makes the wearer man-handling the axe no less a rock star. Amen.

If anyone has complete setlists for Jesse Sykes or Langhorne Slim, feel free to comment!

Mimicking Birds Setlist: 1. New Doomsdays 2. Dead Weight 3. Home and Somewhere Else 4. Whom Who've Been 5. The Loop