Show Review: Band of Horses Races Through the Night at the Pageant, Wednesday, October 13 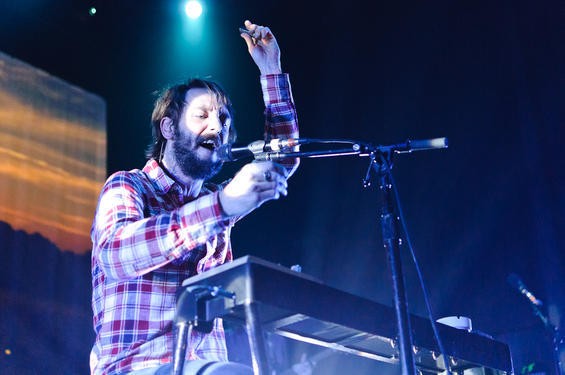 By the end of the Band Horses' mostly potent, sometimes diffuse performance at the Pageant, a fight had broken out on the packed floor. Par for the rock course, you might say, but try telling that to the dude who may still be in a headlock this afternoon. A band this forceful live deserved a better end.

View a slideshow of Band of Horses, Brad and Besnard Lakes photos at the Pageant

Openers Besnard Lakes and Brad were oddly paired with the crisp, surging guitar hooks of Ben Bridwell and company. The first lurched from King Crimson jam-psych to strobe-light-attack space rock. Brad was even more problematic, a kind of self-indulgent piano-dirge set that shouldn't have required cheat sheets on the part of singer Shawn Smith. The only rational explanation for the band's appearance was some quid pro quo for the night's headliners opening slot on a Pearl Jam tour this spring.

At the late start time of 9:50 p.m., Band of Horses threw themselves into a 20-plus song set, with a spectacular but low-tech photographic slide show lit up on a mammoth sheet behind them. Gorgeous panoramas of the western badlands and deserts dominated, though an opening time-lapse film of roadies setting up the stage was even more brilliant. Bridwell's voice was as cutting and exhilarating as on record, hitting the highest of notes without any exertion, even as the stage volume built as the night went on.

Highlights included the Infinite Arms selections "Laredo" and "NW Apt.," and the back-catalog gems "The Great Salt Lake," "Ode to LRC," "The Funeral" and a funky, loose and happy "General Specific." Some of the more mid-tempo numbers from Infinite Arms pulled against the pacing of the night, as did a constant impulse to change instruments at nearly every song. Likewise, a cover of ELO's "All Over the World" "Showdown" sounded fine, but seemed lost on the packed house.

But those were minor missteps in an ultimately thrilling, beautifully choreographed and very welcome return from a band with beautiful song after song to burn.