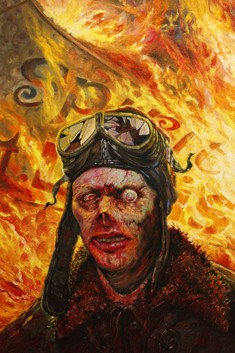 Ink & Drink Comics started out as a social gathering for St. Louis comic creators to meet up and drink beer while talking about comics. However, the group's enthusiasm soon outgrew simple conversation -- and they decided to pool their talents and start making comics.

The first release from this collection of macabre minds will be Spirits of St. Louis -- a horror anthology featuring thirteen terrifying tales. Just in time for Halloween, the collection provides plenty of chills with a lot of local flavor.

The official release is scheduled for Wednesday, October 13 at Star Clipper, 6392 Delmar in the Loop. From 5 to 10 p.m., fans will have a chance to meet most of the contributors. Oh, and there's also going to be free beer -- after all this is an Ink & Drink production!

A to Z recently caught up with contributor/Star Clipper manager Jon Scorfina to talk about the anthology.

William Melton: How did this project originate? Whose idea was it and was the decision to actually do it immediate, or did it gestate over a few weeks or so?

Jon Scorfina: The idea of Ink & Drink originated between Spirits editor and Pretentious Record Store Guy creator Carlos Ruiz and Pangaea creator Kevin Wolf, to form a collective group of comic creators in St. Louis to meet up and work on/ chat about comics. They met through mutual connections at Star Clipper and began attending comic conventions together, sharing table space. Slowly the group grew, adding members, and began meeting up monthly at the Applebee's near the Esquire. At first, it was more drinking cheap beer and discussing comic books, but gradually the idea of putting together an anthology of everyone's comics came out of drunken ramblings.

Once the group decided to do it, how did you go about putting it altogether? Was there a person (or two) assigned to a sort of managerial role to oversee the project?

Carlos Ruiz took the greatest managerial role for the project. It was decided that the deadline for submission was August 1, 2010 in order to get the books printed and to do a test run at Project Comic Con 2 in September in Maryland Heights, MO. Carlos would send out a monthly email to update contributors of the deadline and specifications for stories. Each contributing member was allotted a six-page story. The only real requirement was to write a story in the horror genre. Otherwise, creators had complete creative control over their story. The genre guideline really helped focus the large group.

The second anthology, tentatively titled Shots in the Dark, will be a crime anthology with a planned release of March 2011, with a third Science Fiction anthology planned for later that year. (Page count for contributors will also be increasing from six to eight pages.) Contributors were found through friends and associates of the Ink and Drink group. Star Clipper and Playbackstl were also hubs for comic creators associated with the project. In August, editors Carlos Ruiz, Jason Green and Brian Hollerbach sequenced all the stories together and sent it to print. To the group's surprise, the advanced copies completely sold out at Project Comic Con 2!

Was it difficult coordinating the work of so many authors and artists or did everyone come together and work nicely as a team?

Unfortunately, a few planned contributors were not able to submit work. By happenstance, it turned out that there were thirteen tales of terror submitted. This just felt like the perfect haunting number for an October release! Carlos and I discussed releasing the comic on Wednesday, October 13 at Star Clipper where I'm the general manager, which was extra exciting because it was New Comic Wednesday! For a group of people who love comics, Wednesday has a significant importance to your weekly existence.

From idea to publication, how long did it take to bring this project to life?

Ink and Drink began contacting contributors around May and June of 2010 with the deadline of August 1, 2010.

The official release date is October 13 at Star Clipper in the Loop, correct? What can comic fans expect from this event?

More than half of the contributors (16 out of 22) will be on hand to meet and sign copies of Spirits of St. Louis at the Star Clipper signing. Other works from the contributors will also be available for sale. In the spirit of Ink and Drink, the group will also be supplying free beer for those in attendance.

The most exciting part is Ink and Drink is a group of friends who met through their mutual love of comics, many of which met at Star Clipper. For a lot of creators in the anthology this will be there first published work!

Briefly, could you tell me about your two or three favorite pieces from the anthology so fans get an idea of what's in store from them should they have the courage to dive into these terrifying tales?

My personal favorite story is "Lemp Deck" by Carlos Ruiz and Star Clipper assistant manager Jim Mosley. It follows a repairman doing work on the Lemp Mansion and goes into great detail about the haunting legends surrounding the Lemp Family. I'm also a fan of Nick Main's "The Ozark Witch," which really has nothing to do with a witch but does have a bear eating a camper wearing a "Team Jacob" t-shirt. "Raw Head and Bloody Bones" by the brothers Washburn has some of my favorite illustrations. It's also undeniable that we got some amazing cover illustrations by Adam Davenport (Zombie Charles Lindbergh) and Kyle Morton (Zombie Miles Davis). Without trying to sound pretentious, I liked my story too. My story was an attempt to mix my love for Calvin and Hobbes and Peter Bagge's Hate with a giant tentacle monster who messes with all my stuff, with mixed horror/comedy results.

The full table of contents for Spirits of St. Louis:

Blue Label by Carlos Gabriel Ruiz
The Portrait by Jason Green, Joe Costello, and Greg Aubry
Raw Head & Bloody Bones by Sam and Noah Washburn
The Ozarks Witch by Nick Main
The Tentacle Monster in my Comics Box by Jon Scorfina and Stephanie Richardson
Beyond the Valley of the Sun by Nate Hessling and Brad King
Lemp Deck by Carlos Gabriel Ruiz and Jim Mosley
Hiding in the Shadows by Steve Higgins and Justin Crouse
The Faithless by Ahad Bhaiji
Bad Time Story by Jonathan Norfleet and Michael Harvey
The Gruesome Toadwart by Justin Crouse
The Stepmother's New Mouth by Sam and Noah Washburn
The Raven by Edgar Allan Poe and Kevin Wolf