Glenn and Ryuko Forever: Danzig and His Wicked Pussycats

Recently, the Internet has taken an interest in Glenn Danzig's domestic companions. Whether it's the implications of a romantic partnership with Henry Rollins or the paparazzi photo of Danzig carrying a box of multiple cat household Fresh Step (see photo after the jump), people have become fascinated with whom/what he's snuggling up. 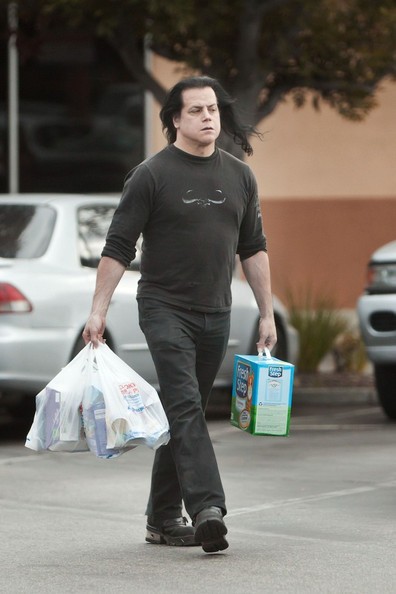 There are so many wonderful things going on in this photograph; taken together, they make it a work of art. Aside from the fact that he's wearing his own band's shirt and looking as unapproachable as ever, something about the way Danzig's fingers wrap around that little plastic carrying handle on that box of Fresh Step is nothing less than precious.

So, aside from his love for music, comics, various occult topics and - how could we forget? - himself, it appears as though Danzig has a new fascination: felines.

According to a recent interview for Decibel magazine, Danzig has "no less than four" cats, one of which is named Ryuko. Danzig is quoted talking to the cat (asking if it's hungry) and narrating its actions as it passed through the room.

We probably should have seen this coming. Danzig covered Bowie's "Cat People". The video for Danzig's "Wicked Pussycat" stars women fetishized in cat costumes, licking at saucers of milk. Supposedly the original title for "Spinal Remains" was "Feline Nursery."

In short, the man who brought you Verotik, the devil's lock and songs about mother-raping and baby-killing has become a cat lady. And I, for one, couldn't be more pleased.